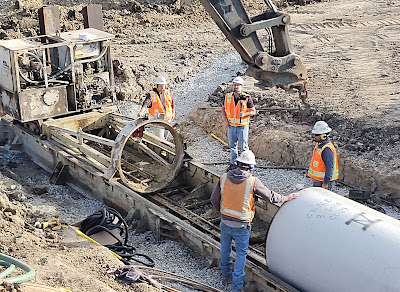 Exeter residents might want to tune into Bloomberg TV next Saturday afternoon as local business Horizontal Boring and Tunneling Co. will be featured on their “World’s Greatest!…” television show.

The show, which according to their website, hopes to “captivate audiences with quality ‘edutainment’ that entertains while it educates. . .World’s Greatest prides itself on highlighting the positive and making sure that audiences are able to connect with and understand the companies behind products people use every single day.”

The producers of the show reached out to Horizontal after searching for the right company for a show on underground construction.  According to Horizontal’s administrative coordinator Lindsey DeBoer, the producers interviewed several underground construction companies and in March of 2021 spoke with her before investigating the possibility further during discussions with Horizontal President Brent Moore and Senior Project Manager/Estimator Kenton Moore.

It wasn’t the size of some of the projects the company has completed that attracted the show, according to DeBoer it was, “more the company as a whole, what separates us from the competition.  They were interested in our history and the adversities we had overcome.”

After extensive communication with the producers, who were in Florida, the film crew out of Kansas City came to Exeter on October 6th to film and recorded footage in the office and around the Exeter area.  They also interviewed several employees and toured the facilities before heading to film the company on site tunneling on the South Beltway project south of Lincoln.  The Horizontal portion of the Beltway project was started in 2020 and was comprised of three different bores.

On the Lincoln South Beltway project the Horizontal crew was tunneling 242 linear feet (LF) of 48-inch reinforced concrete pipe (RCP) for a drainage culvert under Highway 2, using an Akkerman 480 Tunnel Boring Machine.  The tunneled for the culvert and also did some pipe jacking.  Horizontal has completed their portion of the South Beltway project.

The company does horizontal boring projects all over the United States but the Beltway project was a large scale project close enough for the film crew to visit Exeter and the construction site in one day.

The “World’s Greatest!...” Episode 315 featuring Horizontal Boring & Tunneling Co. is set to air on Bloomberg TV on Saturday, February 12 and Saturday, February 19, 2022 at 2:30 PM Central Time.   Paul Erdkamp, also an Exeter local, is seen on the show along with an interview of Kenton Moore.  The show is available on DirecTV (Channel 353) and DISH Network (Channel 203).

Horizontal Boring and Tunneling Co. was incorporated in 1982 in Exeter and has remained in the community for forty years.  In a recent press release Kenton Moore stated, “We are honored to be selected for the show, and we look forward to many more years of providing trenchless infrastructure solutions for customers and communities.” 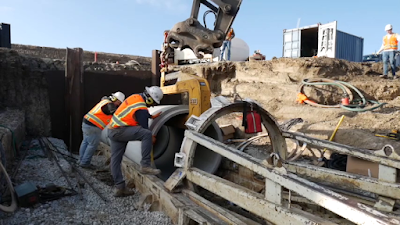 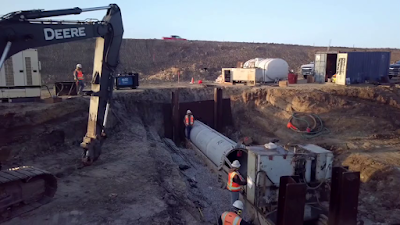 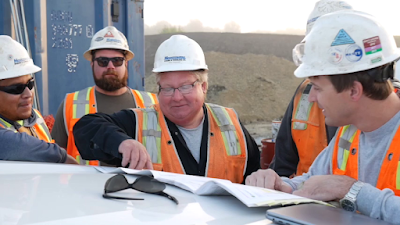 Paul Erdkamp, of Exeter, points to an item on the blueprints while Kenton Moore, far right, looks on.