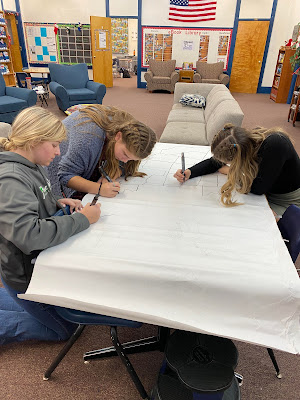 Joleen Vossler, Kierra Papik, and Lily Jeffries getting started outlining their poster of the United States for Geography class. 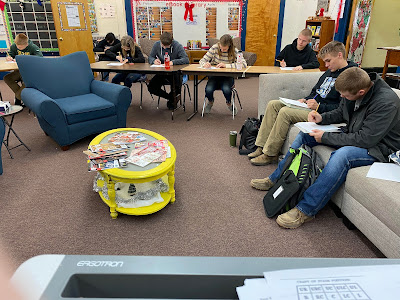 There are many different learning experiences taking place during the semester in Mr. Murphy's classes. In speech class, students have presented  demonstrations and informative speeches. They will complete the semester by giving a persuasive speech. Additionally, groups of three freshmen went to the third, fourth, and fifth grade classrooms and presented. Freshmen are also taking Geography with Mr. Murphy. The class has covered Nebraska geography, the five themes of geography, North America physical geography, and economic geography. Currently the class is transitioning into geography of the United States and will continue next semester adding in world geography.

In eighth grade history, a great deal of time has been spent on the American Revolution and primary documents important to the United States, especially the Constitution. The high school American History class began with Westward Expansion in the mid and late 1800s, followed by Populism, Progressivism, and World War I. The semester is completing with the Roaring Twenties. The Modern History Class focus is events during and after World War II. The Cold War is the dominant theme of study during the first semester.