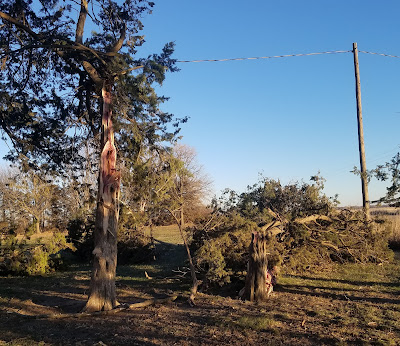 A freak December storm with winds of hurricane strength swept through the state of Nebraska on Wednesday, December 15. Storm damage in the village of Exeter was limited to tree branches and scattered yard items.  On the outskirts of town, evidence of the strong winds that were part of a storm system were obvious.  The storm that moved across the state produced high wind warnings, red flag fire warnings, thunderstorm watches, tornado watches, thunderstorm warnings and even several tornados that touched down.  Exeter got less than a half inch of rain in the quick moving storm.  Several area schools let students out early but the Exeter-Milligan district held school all day and at 3:30 when the school day was over the storms had moved through the area.

Above – Just a mile east of Exeter, Paul and Becky Erdkamp discovered that seven large cedar trees had been destroyed that provide a windbreak around their property.  The trees were splintered and some had to be cleaned up off of Road 20.  This tree sits on the north east side of their property.  Also, they had a large aluminum canoe that took a wind driven trip and it has yet to be found.

Below – Another of the Erdkamp property tree that was on the west side of their property.  Fortunately none of the trees did any serious damage to their home. 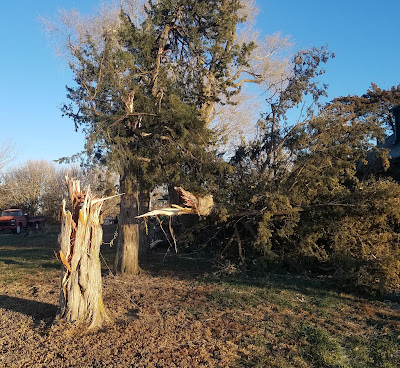 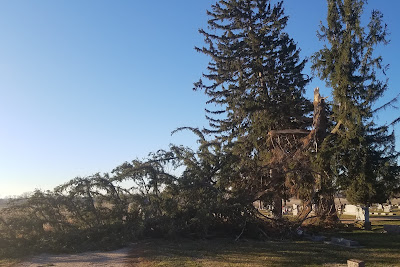 There was also tree damage at the Exeter Cemetery as it is perched on a hill on the north east side of Exeter.  Several trees were sheared off and blocked the rear cemetery access road.
Posted by Leesa Bartu at 7:30 AM