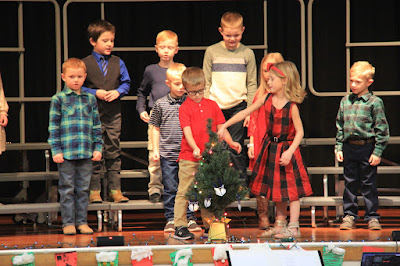 Exeter-Milligan Kindergarten through sixth graders entertained their family members and friends with a Christmas concert on Tuesday, December 14th in Exeter.

Under the direction of Mr. Mark Perez the Kindergarten class opened the evening with “Christmas is Here,” and then they took turns adding lights and ornaments to a little Christmas tree as they sang “Rock Around the Christmas Tree.”

The first and second graders performed together starting with “Up on the Housetop,” before embracing the spiritual “Mary Had a Baby.” They finished their portion of the program with “Ring Ring Ring the Bells,” accompanying themselves with bells and drums.

The third and fourth graders also combined to sing “Pack the Sleigh,” and “Makin’ Christmas Cookies” before they performed “Jingle Bells” on Boomwhackers.

The fifth and sixth graders just performed the vocal “Snowflakes” before using the boomwhackers to perform “Joy to the World.”  They asked the audience to sing along as they performed “Silent Night” on the Ukuleles.

The fifth grade band had their first band performance which featured “Jingle, Jolly Christmas.” They were then joined by the sixth grade members of the band to play “First Rockin’ Christmas,” and “Christmas Fun.”  There were seventeen members in the fifth and sixth grade band.

All of the audience was invited to share in a Christmas tea sponsored by the Exeter-Milligan Booster Club Fine Arts Committee after the performances. 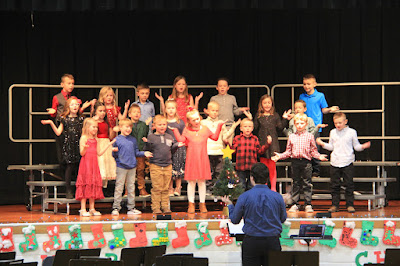 Above – Exeter-Milligan first and second graders sing the traditional Christmas song “Up on the Housetop.”

Below – The Exeter-Milligan third and fourth graders get ready to perform “Pack the Sleigh,” to a packed audience of family and friends in Exeter on Tuesday evening. 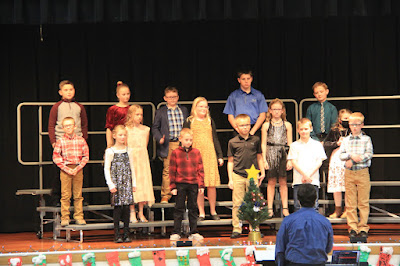 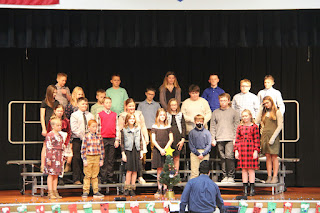 Above – The Exeter-Milligan fifth and sixth graders performed one vocal number before tuning up their boomwhackers and band instruments.

Below -  Sixth graders Addison Foutch (left) and Deacon Erdkamp (right) pay close attention to the music while performing “Joy to the World,” on their boomwhackers. 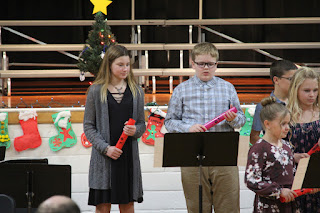 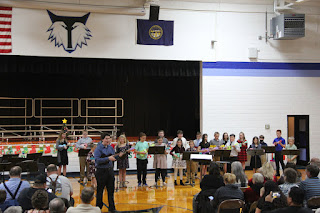 Above – All of the fifth and sixth graders along with Mr. Mark Perez played “Silent Night” on the Ukuleles and invited the audience to sing along. 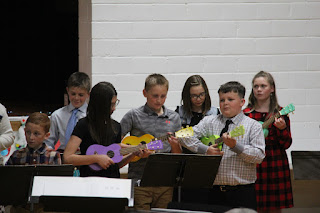 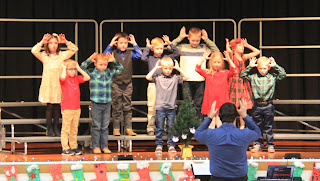 The Kindergarten class sings “Christmas is Here.”
Posted by Leesa Bartu at 9:39 AM