The Great Pumpkin in Exeter 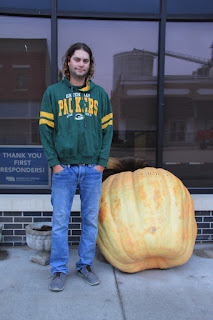 Brandon Dinneen with the 540lb pumpkin he grew. 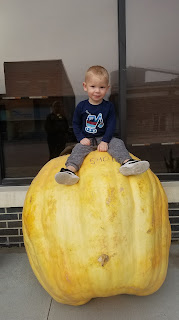 Grady Due sits on the giant pumpkin which is sitting outside of Generations Bank.

The Great Pumpkin arrived in Exeter earlier this month.  And in great, we mean great big, 540 pounds.

The pumpkin, grown by Brandon Dinneen, is his biggest to date.

He recalls about five or six years ago that it was “My grandpa’s idea.  We had a bunch of trees in an area and we tore them out and my grandpa wanted a garden there.  We just grew pumpkins and watermelon.  We still grow them in the same spot.”

They usually have about 20-30 100 pounders but “every once in a while we get a big one.  It just depends on the year,” explained Dinneen.

He doesn’t have any special tips for growing the pumpkins so big and claims that he has ignored all of the internet advice for growing large pumpkins.

“We saw how big this one was growing and we knew it was going to be big, but we didn’t think it would be this big,” according to Dinneen.

Transporting it was a challenge.  They used a tractor with forks on it to bring it out of the garden.  They stopped to weigh it in Burress on the scale and brought it to town to deliver to the front of the bank.  They used four wheeler ramps covered with plywood and “a bunch of us had to roll it down.”

Dinneen was very proud of this particular giant pumpkin.  He has always bought giant pumpkin seeds off of the internet, “We always save seeds.  It was one of our own seeds that grew this one.”

The other large pumpkins the Dinneen family shares with local friends and family.

After Halloween Dinneen will head back up to the bank to remove the pumpkin and harvest the seeds in hopes of growing an even bigger Great Pumpkin.