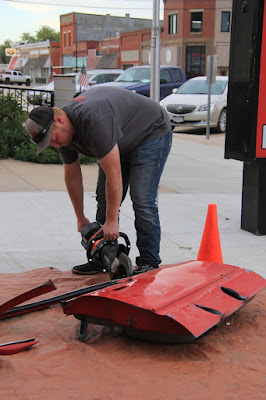 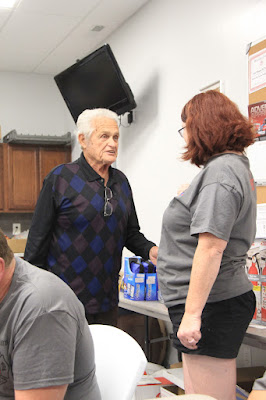 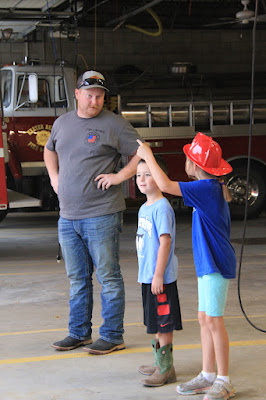 Lane Strate gives Mason and Maize Ogren a tour of the fire trucks and rescue equipment.  Below, the new extrication equipment. 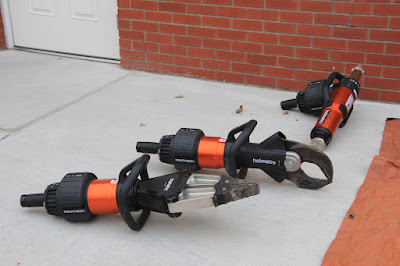 This has already been a very busy year for the Exeter Volunteer Fire Department.

Earlier in the year they mailed out a letter looking for funds for a new set of extrication equipment for the department.  This new “Jaws of Life” is battery powered so they will no longer need to hook it up to a generator.

They also held several fundraisers this summer including their yearly bbq, a golf tournament and a corn hole tournament.

Instead of holding the program all during the month of October on Monday evenings they held a one day Saturday class with fifth and sixth graders from the Exeter-Milligan school district.

Strate explained that the students “will have hands on training as well and classroom time.  They will learn fire safety and prevention, planning as escape route, CPR, and they will get the use the new Jaws and also learn about the trucks as well as shoot water from them.”

The department is hosted an open house in October to give residents the opportunity to tour the renovated meeting room, see the new extrication equipment, and get a free blood pressure check as well.

Strate wrote a grant and received funds from Corteva to sponsor this event which includes food and door prizes.  The department also recently received a grant from the Mary Tous foundation for new bunker gear and bottles for their SCBA units.

Currently the department has four members in EMT classes which should conclude before the end of the year.

Fire Chief Joe Miller added that training is a big part of their plan for the next year.  “We want to get all of the firefighters trained for CPR along with training on the new equipment.  We want everybody up to speed.”

He also mentioned that several will be training for fighting wildfires this year at the Eastern Nebraska Wildland Fire Academy at Ponca State Park.

The big news for the department this year was being filmed as part of a documentary on volunteer fire departments.  The goal of the documentary was to help departments recruit volunteers.  The film crew spent four days in Exeter filming department members in their everyday life events and training on equipment.

Strate was the driving force in Exeter being chosen for the documentary, “We are hoping to shine a positive light on volunteering and maybe encourage others across the country to volunteer in their communities.”

The department is also working towards purchasing a new truck in the near future.