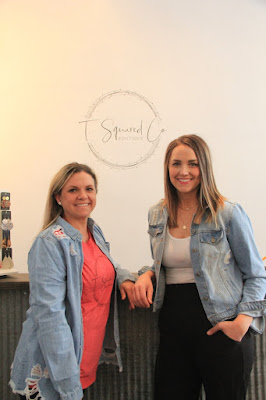 Tara Due (left) and Tysha Smith (right) stand in their new boutique in downtown Exeter.

Exeter has a new shopping spot in town as T-Squared as officially opened downtown at the corner of South Exeter Avenue and East Seneca Street.

Sisters Tara Due of Exeter and Tysha Smith of Seward opened their clothing and jewelry boutique downtown after almost three years in business.

The sisters started making earrings separately in March of 2018 and were doing craft shows along with wholesaling their earrings to about 20 boutiques.

In July of 2019 thy added graphic tees and their storeroom (also known as Smith’s basement) started to look like a warehouse.  “We thought there was no way we will ever have a store front,” explained Smith.

Prior to opening the boutique the majority of their sales were from their website.  They post new arrivals each Thursday and have a special $12 T-shirt on their VIP on Facebook each Tuesday.

With their recent purchase of a DTG (Direct To Garmet) machine they now are offering wholesale tee shirt orders.

The duo splits up all the duties.  Smith does the ordering, posting on social media and manages their website while Due claims she does the “fun” stuff, like taxes, wholesale orders and graphic tee’s. Both still make earrings to sell.

The started the business because “we wanted to feel like we were contributing financially as both of our husbands are in the military,” according to Smith with Due nodding her agreement.

They have eight kids between the two of them, five of which are not in school.  Their mom often helps fill in the gaps, especially with local orders picking them up from Smith in Seward and meeting Due in Beaver Crossing.

The sisters, already close, have grown closer through the venture, “I don’t think I would be able to do this business for three years without an argument with anyone else.  Our personalities work well together,” explained Due.

One of their biggest challenges has been time management, especially having young children.  Smith’s daughter, Taegen, likes to help out where she can (she also claims your name has to start with a T to work in the business).

They sometimes work late in the night fulfilling orders but “We’re stay at home moms so that comes first,” explained Tysha.

They still plan to do pop up shops and are at James Arthur Vineyards the last Saturday of the month May through September.  The new boutique will be open some hours every week with the hours posted each Monday on their Facebook page.