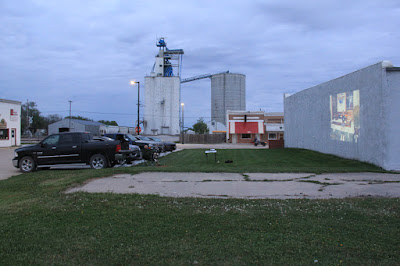 Exeter-Milligan superintendent Paul Sheffield has shown the senior video downtown in Exeter last week and it was also shown in Milligan as the seniors were recognized by their communities. 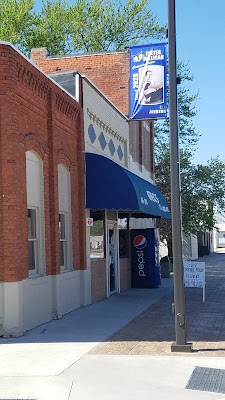 Banners with each of the nine Exeter-Milligan graduates are displayed on the light poles of downtown Exeter and Milligan. 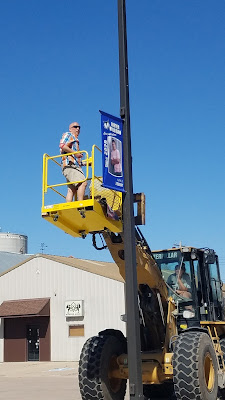 Exeter-Milligan Superintendent Paul Sheffield gets a little lift from Village of Exeter employee Tara Mueller as he places another graduate banner on a light pole downtown.

Exeter-Milligan is trying to find a multitude of ways to honor their graduates amongst the social distancing and directive health measures handed down from the state.  They find themselves in an unusual position as there are just nine students graduating from Exeter-Milligan this year.

The district has a theme of “9 seniors, 9 days,” according to Principal Laura Kroll, “It will never replace all the things that got cancelled but it is something.”

Graduation will be held on Saturday, May 9 at the Exeter-Milligan football field in Milligan.  There will only be 10 people on the football field and others may attend but must stay in their vehicles at all times.  The district plans to attempt to broadcast the event on Striv.

The senior video was played every evening in the nine days prior to graduation in downtown Exeter and Milligan and the football field lights in Milligan were lit at 8:20 (20:20) each evening during the same period.  Yard signs were delivered to each graduate along with a daily care package which included items from their teachers.

The senior banners that the district usually hangs in the gym have been reordered in duplicate and hung on the downtown light posts in both communities.

The class of 2020 graduation events will never be forgotten by this group of seniors.