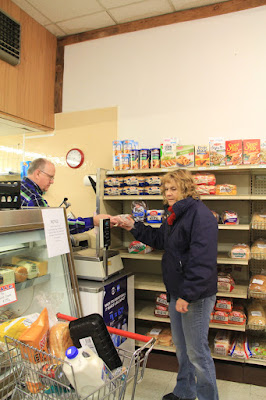 In early December the Exeter community was rocked with the news they learned on facebook, Greg’s Market planned to close their doors by the end of February.

Their online statement included an explanation for their closing after 20 years of service to the community, “The current climate of small business, e-commerce, super-fast shipping, etc. have made it very difficult to compete on price and selection in the grocery category. . .profit margins continue to be thinned by the constant battle for the ‘best’ price and rapidly increasing credit card processing fees.”

It didn’t take long for the community to respond.  Just before the end of the year a group of concerned citizens held an evening discussion and out of that was born the plan for community members to pool their resources and purchase the store from the Greg and Jackie Yound.

The group, calling themselves the Exeter Investors Corporation met in mid-February to purchase shares (minimum was $1000) and elect a board of directors.  Approximately 50 investors purchased 200 shares of stock in the corporation.

The meeting also informed shareholders how the corporation would work and detailed legal paperwork was passed out and signed.  The purchase agreement with the Yound’s and the Exeter Investors Corporation was signed on Monday, March 1. Greg’s Market will officially close on March 30th  and the store will be closed on March 31st for inventory.

The investors plan to tackle a few minor repairs on the fire marshal’s recommendation list on March 31st with the rest completed within 90 days of the store reopening. The store will reopen under the new ownership on April 1st.

The other employees were all given the option to keep their jobs and Schlegelmilch added, “we really hope they stay.”

Under Schlegelmilch’s leadership the board hopes to keep things about the same.  Right now, the only schedule change will be closing at 6 p.m. instead of 7 p.m. on Wednesday nights.  “Otherwise, we are going to try to keep it business as usual,” according to Schlegelmilch.

The store began as Norm’s IGA and then changed to Norm’s Shur Save before their son, Greg, and his wife Jackie, purchased the store from them in April of 1999.  Greg’s Affiliated foods has continued with groceries, meat department, deli, catering, baked goods and over the years have added a liquor department along with serving noon meals.  It became Greg’s Market several years ago.

Watching the communities around Exeter lose their grocery stores motivated residents to take action before they lost their store. Schegelmilch commented, “Once again the Exeter community has stepped up and has made this community one of the greatest ones to live in.”

Schlegelmilch sees a lot of potential in the store and asks “that you give us a chance.  Take advantage of the customer service, the one on one personable experience at Greg’s.”

Greg added, "Jackie and I would like to thank the many customers that supported us and my parents over the last 50 years.  Many generations of local families were and are a huge part of our successes.  We ask that everyone support all our home town businesses and make Exeter a place that people want to shop, work, and live.  Thanks again and we'll see you around."