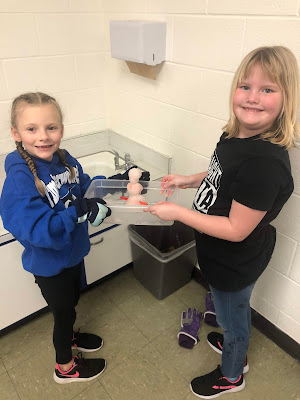 The First Graders have been hard at work this semester, from learning about the states of matter, solutions and mixtures to researching a President in honor of President's Day.  The first graders were able to learn about the three states of matter: solid, liquid, and gas.  They spent several days finding each state of matter around the classroom and school, along with separating them through an interactive game on the smartboard.  To celebrate the end of the states of matter chapter along with the 100th day of school, the students were able to create a science experiment using snow.  Each of the students built a snowman.  They placed it in a container and watched as their snowman went through all of the states of matter.  They created a book about it, using pictures they took of their snowman.  Then they wrote about what happened during each phase.  They really enjoyed bringing their snowmen into the classroom and watching it go through each phase.  The First Graders are currently learning about solutions and mixtures and will be creating an experiment next week. 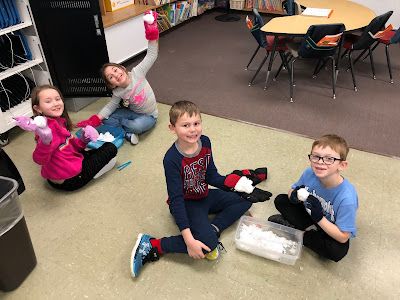