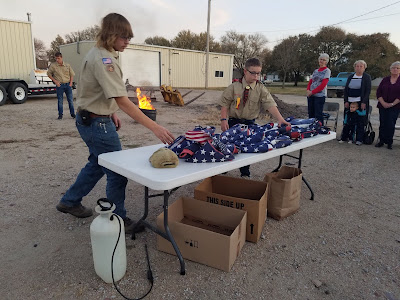 Boy Scout Ben Bartu (left) and Cub Scout Richard Hickman pick up flags folded and ready to be retired during the ceremony on Saturday evening in Exeter.

Saturday evening the Exeter Post 218 Sons of the Legion honored Veteran’s with an evening which included flag retirement, a meal and a band.

The program began at 5 p.m. with Boy Scout Troop 218 conducting a flag retirement.  After retiring 40 flags the audience returned to the Legion for the meal and band.

Boy Scouts Mikey Bartu and Ben Bartu were assisted by Webelos Scout Richard Hickman of Pack 218.  The scouts continued to retire the cotton flags (over 100) and monitored the fire until it went out.  The grommets were sorted out of the ashes and will be buried.

The US Flag Code states “The flag, when it is in such condition that it is no longer a fitting emblem for display, should be destroyed in a dignified way, preferably by burning.” (Section 176 k).

The flag code gives no specific guidance for new fabrics such as nylon, which when burned, give off toxic fumes.  One organization began to accept damaged nylon flags so that they could be recycled into new nylon material, but that program is not available right now.  Two current options for retiring nylon flags include cutting up the flag in a respectful manner or burying the flag. 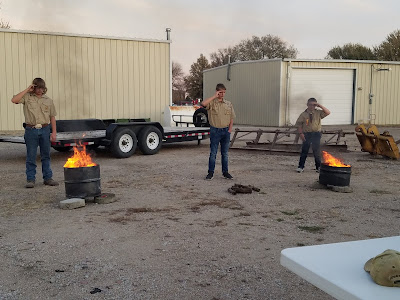 From the left, Boy Scouts Ben Bartu and Mikey Bartu and Webelos Scout Richard Hickman salute as the flags are respectfully retired during the ceremony in Exeter on Saturday evening.
Posted by Leesa Bartu at 7:30 AM