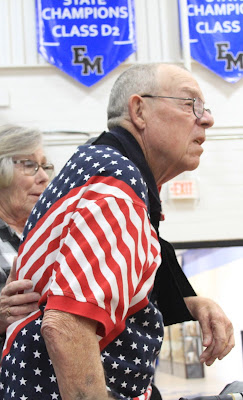 Air Force Veteran Chuck Warner salutes and stands with the assistance of his wife when the Air Force anthem is played by the Exeter-Milligan band at the Veteran’s Day program in Exeter.

Exeter-Milligan honored area veteran’s on Monday, November 11 with rolls and coffee hosted by the National Honor Society members prior to a very special program.

The audience was welcomed to the program by Student Council president Kayla Geiger.

Deacon Erdkamp, a member of Cub Scout Pack 218 led the flag ceremony and the pledge of allegiance with other pack members providing the color guard.

Johnson gave a brief history of Veteran’s day.  He noted that it began as Armistice Day honoring the 11th day of the 11th month at the 11th hour when the armistice was signed, but in order to honor all war veterans the name was changed.

As a college student at a land grant college in Arizona, Johnson was required to be a part of the military and joined the Navy reserves.  In 1966 he was called to active duty and stationed in Coronado, Calif.  He headed to the western Pacific theatre where he served two tours of duty in Vietnam.

His duty was on a ship providing air support off the coast of Vietnam.

He commented, “This was no ‘tour’ so I don't know where the word came from. The casualties were brought back to the ship. I saw first-hand what sacrifice looked like.”
When he returned stateside in 1969 he came back to “a conflicted world, some with anger.  To quote Forrest Gump, ‘That’s all I’m going to say about that.’”
He ended his speech by expressing his appreciation for celebrations like the Exeter-Milligan program and reminded students, “Don’t forget the soldiers who fought to give you freedom.  Carry on, and that’s an order.”

The Exeter-Milligan band played “Nathan Hale Triology” before recognizing each branch of service during the playing of “America’s Finest.”  Veterans in the audience were asked to stand as their anthem played and the audience recognized them with applause.
The program was closed by Student Council Vice President Anna Sluka. 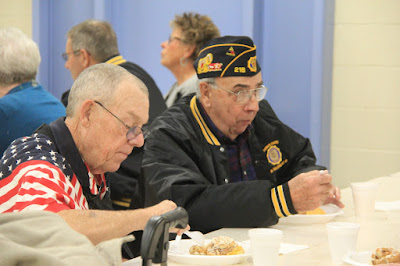 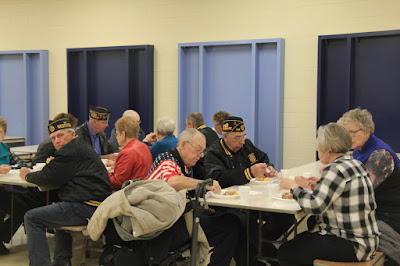 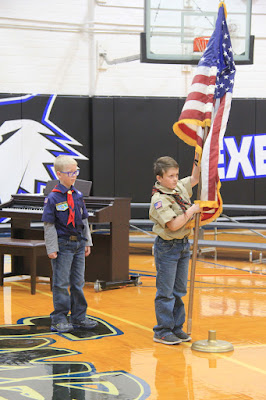 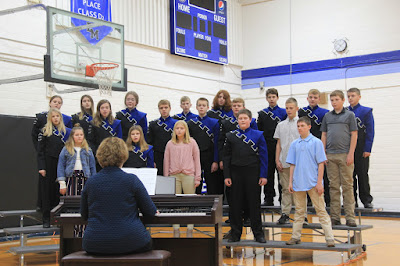 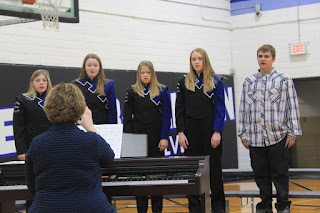 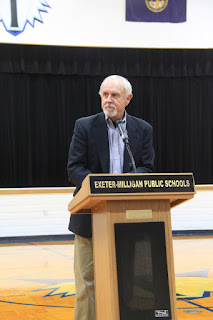 Below – Army veteran’s stand and are applauded while the Exeter-Milligan band plays “The Army Goes Marching Along.” 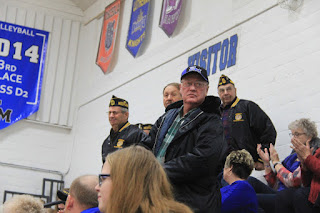