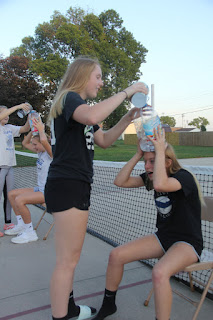 Briana Capek carefully pours water in the jug Maddie Luzum is holding on her head.


Christians in Action began their ministry year with a fun night of water activities.

The group, which is sponsored by the United Methodist Church in Exeter, opens its doors to all the youth in the area.  It is a nondenominational group for Kindergarten through high school.

For their first meeting games were on the agenda. They split into two teams and raced to fill a water jug on someone else’s head, then they chased pool noodles before getting drenched by a bucket they held up with their feet.  They also had a watermelon eating contest.

Their goal this year is “to draw nearer to God in Spirit and truth,” according to Klemm.

She also noted that they are planning pre-Christmas and pre-Easter services which will be on Wednesday nights for the communities.

The finishing touches were put on the basement meeting area of the church this fall.  Last year a mural was designed by Exeter-Milligan art teacher Lisa Kanode and the group members painted it.  Also a game room with an air hockey and a ping pong table were added.

Each year the group plans several outings to serve the community.  They usually go caroling at a local nursing home before Christmas and then spend a day in the spring helping clean up yards for those unable to do the work. 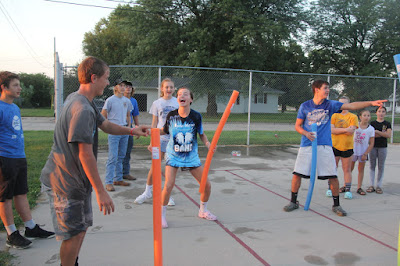 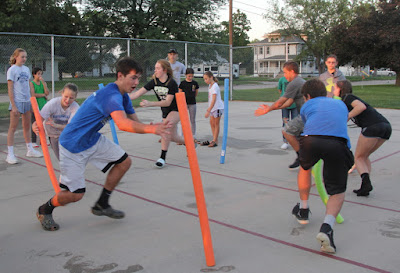 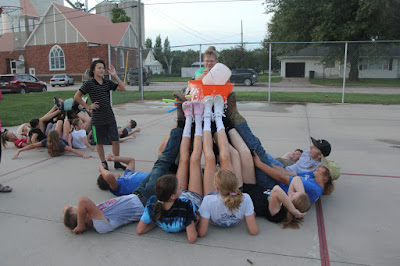 Above – Carver Kanode (left) keeps an eye on Pastor Vicki Klemm as she pours water in a tub on top of the feet of the older group.  The next step in this game was to each remove one foot to see how long it was before they got soaked.

(courtesy photo) – Exeter-Milligan art teacher Lisa Kanode stands next to the mural that she helped the CIA youth group design and paint in the basement of the Exeter United Methodist Church. 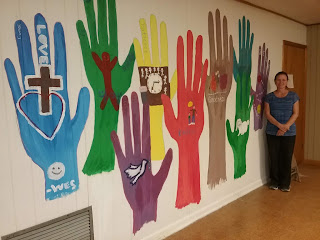