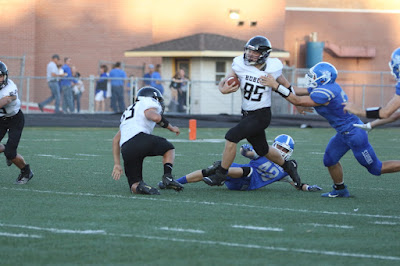 A full moon on Friday the 13th seemed to be the good luck charm for the Exeter-Milligan-Friend Bobcats.

Although the game started out with Nebraska City Lourdes intercepting the Bobcats on the third down and scoring quickly, the Bobcats held their ground and denied the two point conversion.

After the kick off EMF benefited from several Knights penalties including a face mask and a helmet to head penalty.  Max Zeleny broke free and ran the ball into the end zone with 8:03 left in the quarter.  EMF didn’t make the two point either and the score was 6-6.

The penalities stacked up as EMF was called for pass interference and the Knights were penalized for an illegal substitution on 2nd down and 20.  They came roaring back for a first down and on the third down fumbled the ball.  It was recovered by Keegan Newsome.

The Bobcats had their turn to fumble and it was recovered by the Knights at the Bobcat 35 yard line.  Before things could go too far Jackson Beethe intercepted a Lourdes pass but a block in the back penalty after the interception took the ball to the Bobcat four yard line.

Zeleny broke through the line and made it all the way to the end zone with a score of 12-6 with 4:08 left in the first quarter.

Lordes got loose from mid-field and slipped multiple tackles with 2:15 in the first quarter the score was tied 12-12.

EMF turned the ball over on downs and on the first down Aidan Aldana snuck through the Bobcats defense and tacked on six for the Knights.  PAT failed and the score was 12-18 with 7:44 left in the half.

The Bobcats had another pass intercepted but the interception was nullified by a roughing the passer call and with the penalty tacked on the Bobcats were at the forty yard line.  A targeting call on Lourdes tacked on 15 yards to the Bobcat progress leaving them at 1st and 10 on the Lourdes 16.
On fourth and just two to the end zone the Bobcats went for it and pushed into the end zone.

Christian Weber’s pass to Casey Jindra was good for the two points with just 3:22 left in the half 20-18.

Second half Lourdes fumble was recovered by Nick Hayek on the 29 yard line.  Weber passed to Beethe and Beethe shrugged off tackles and into the end zone.  Now the Bobcats were up 26-18 with the two point attempt denied.  1:23 left in the quarter.

Lourdes fumbled and Dylan Bonds snatched it up.

With 4:23 left in the third quarter the Knights found the end zone and tacked on six plus the two point. 26-26

The Bobcats jumped out on top with a Weber pass to Beethe and Zeleny ran in for the extra two. 34-26 with 11:49 in the fourth.

Lourdes tried to convert a fourth and one possession but fumbled and Jindra recovered.  The Bobcats marched down the field and tacked on 8 more with just 6:14 left in the game.  42-26

Lourdes got loose with 4:38 left in the game and tacked on six 42-32.  An onsite kick by Lourdes backfired when Zeleny picked it up on a hop.  The Bobcats had a few nervous moments as Damon Honeysuckle snatched an EMF fumbled and tacked on six for the Knights.  Lordes got the two points and were sitting 42-40 with 3:33 left in the game.  The Bobcats held on and ran the clock down to pick up their first win of the season.

The Bobcats will meet Thayer Central in Milligan Friday night.  Homecoming court will be introduced on the field after the game and the Exeter-Milligan Booster club will have their Tailgate feed starting at 6 p.m. until halftime. 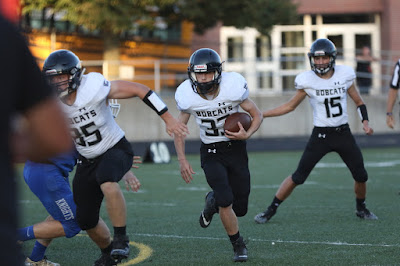 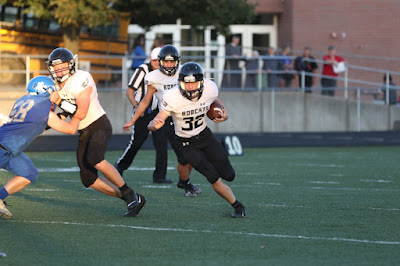 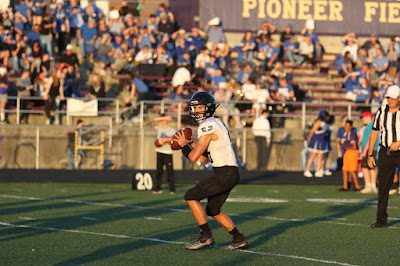 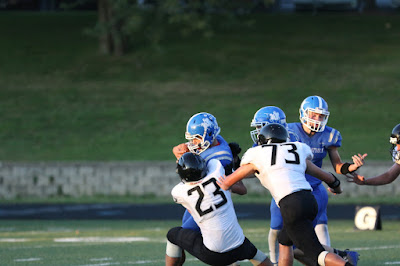 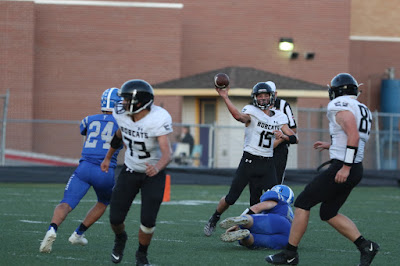 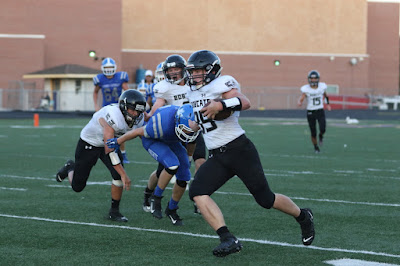 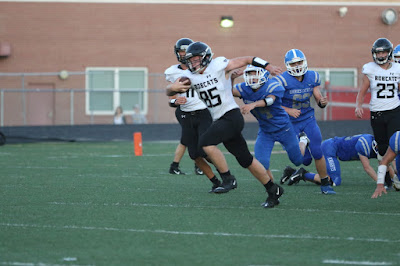 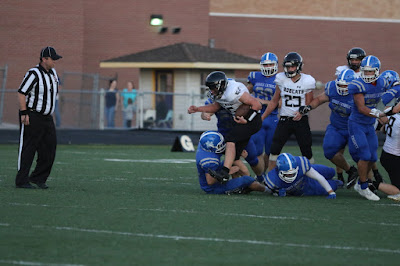 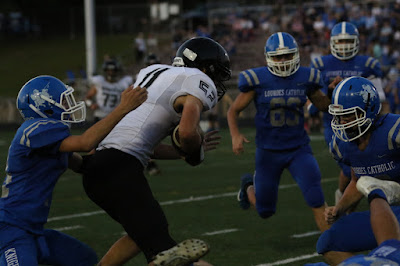 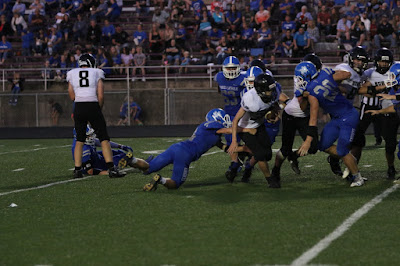