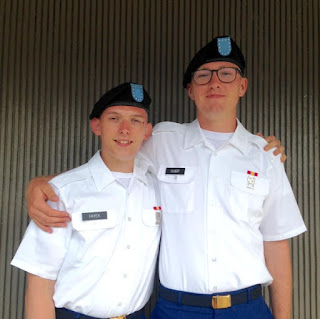 The summer before a senior year in high school is usually an idyllic repast before the reality of adulting arrives.  However, two Exeter-Milligan seniors got a taste of the real world when they joined the National Guard and went to basic training in South Carolina this summer.

Ryan Sharp, of Exeter, and Nick Hayek, of Milligan, separately decided to join the National Guard.  “We weren’t planning for both of us to go at the same time,” explained Hayek.

Sharp added, “It was a crazy coincidence.”

Sharp ran into a recruiter at a career fair and decided he wanted to take the National Guard path to help him pay for college.

Hayek had similar goals but “joined the guard for the benefits.  I feel like it would help me strengthen myself plus I got some cash on the side.  It will help me out for college.”

To start their guard careers they headed to boot camp at Fort Jackson, South Carolina for the summer.  Once they got their they ended up in the same battalion and company, 3-60 River Raiders Echo Company, but in different platoons (first for Sharp, and fourth for Hayek).

They explained that since they are younger they are part of the split operatives program.  Normally, immediately after basic training, guard members head to advance individual training (AIT).

With Sharp and Hayek still needing to complete their senior year of high school they did basic training this summer and next summer will head to AIT before starting college in the fall.

Sharp will head to Fort Lee, Virginia where he plans to train to be a supply specialist for eight weeks.

Hayek will go back to Fort Jackson, South Carolina to train in Human Resources for 12 weeks.

Hayek hasn’t decided what path he will take in college yet, Sharp is looking at earning a degree in Sociology at UNL before heading to Penn State for a master’s degree.

It wasn’t an easy summer as the humidity in the south made the heat feel hotter, but both agreed that the football training they are doing now is “actually a bit harder than basic training.”

Hayek felt like they did a lot of cardio workouts but didn’t get the strength training it like they would in the weight room.

Neither senior regrets the experience.  Sharp said “There were times when it was fun.  I’ll miss the people, but I wouldn’t want to do it again.”

Hayek added, “I wouldn’t say basic training was life changing.  I wouldn’t recommend it for everyone and definitely wouldn’t force anyone to do it.”

One positive they both agreed on, they came out with “more discipline and more respect for their elders.”