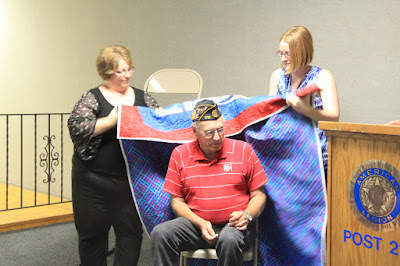 Raymond Franzen is presented a Quilt of Valor at a ceremony at the Exeter Legion.  Placing the quilt around him are his daughters Brenda Motis, left, and Corinne Downey, right.

Raymond Franzen of Exeter was honored with a Quilt of Valor during a ceremony held Friday, July 26 at the Exeter American Legion Home.

Franzen, a Korean War Veteran, was set to receive the honor in June but a death in his family postponed the presentation.

The ceremony was well attended with Franzen’s wife, Jeannette, in the audience along with several of his grandchildren, sons-in-law, his siblings and other family members.

Marsha Jorgensen and Pat Becker are the local representatives for the Quilt of Valor program.

Jorgensen gave a brief history of the program explaining that it was started in 2003 by Catherine Roberts who son was deployed in Iraq.  After a dream gave her the idea that quilts from home would be comforting to those serving, she began to make them to award to active military along with veterans.

Franzen appreciated the idea of the quilt of valor program, “I think it’s great.  It means you took an oath to serve your country and they are honoring that.  It makes a guy feel good about everything.”

The quilt awarded to Fransen was made by Carol Harris, an Exeter native who now lives in North Carolina. Franzen was taught by Harris’ mother, Jane Kaiser, in grade school and Franzen was an honorary pallbearer at Kaiser’s funeral.

Franzen volunteered for service January 18,1961.  He did his basic training at Fort Riley, Kan. and then went to Fort Sill, Okla. for artillery survey school. He also graduated from advanced artillery survey school before heading to Fort Dix and then to Germany where he was stationed with Headquarters Battalion 9th Field Artillery based in Kitzingen, 50 miles south southeast of Frankfurt, Germany.

Franzen and his unit ran surveying equipment to calculate coordinates for firing rockets and artillery.  They were general support for the third infantry.

After the ceremony each of the Legion members saluted Franzen and honored him for his service.  Audience members also took the opportunity to thank Franzen for his sacrifice to his country.