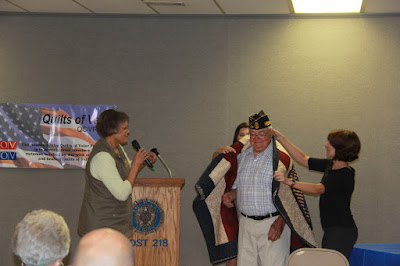 Sterling Dyer is presented a Quilt of Valor at a ceremony at the Exeter Legion.  Placing the quilt around him are his stepdaughters Amy Osterholt (right) and Angie Bell (left).  To the far left is Quilt of Valor South Central Nebraska Coordinator Phyllis Schoenholz. 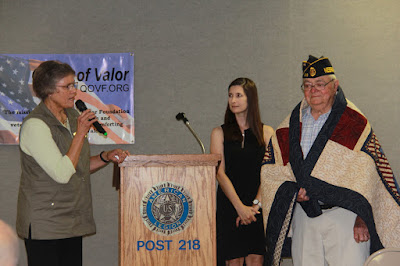 Phyllis Schoenholz, left, gave the history of the Quilt of Valor foundation before Sterling Dyer was wrapped in a quilt by his stepdaughters Angie Bell (middle) and Amy Osterholt (not pictured).

Sterling Dyer of Exeter was honored with a Quilt of Valor during a ceremony held Monday, June 10 at the Exeter American Legion Home.

Dyer, a Korean War Veteran, was nominated to receive the award by an anonymous person and felt “It was a nice honor.  Lots of others deserve it if I do.”

His stepdaughters, Angie Bell and Amy Osterholt held up the quilt and then wrapped it around him.
Dyer’s wife, Sharon, was also in the audience along with his sister and several of his nephews.

The Quilt of Valor program was started in 2003 by Catherine Roberts who son was deployed in Iraq.  After a dream gave her the idea that quilts from home would be comforting to those serving, she began to make them to award to active military along with veterans.

Phyllis Schoenholz, the South Central Nebraska Coordinator for the QOV program, initiated the program in Neb. She gave the history of the foundation and explained how she became involved and recruited 4H members to make quilts.  She noted that the quilts are often recognized as a “civilian purple heart.”

The quilt awarded to Dyer was made by Carol Harris, an Exeter native who now lives in North Carolina. Later Dyer expressed his appreciation for the work and time that Harris put into the quilt. Schoenholz encouraged Dyer to use the quilt and not just keep it folded up.

Auxiliary member Pat Becker read a brief history of Dyer’s service during the Korean War.  He was drafted in the Army in May of 1954 and went to basic training at Fort Leonard Wood, Missouri.

He was sent to Fort Sill, Okla. for 16 weeks of radio repair before he headed to Fort Lewis, Wash.  for a ship to Korea.  For 23 days Dyer was below deck on KP duty, serving 6000 troops.

In Korea Dyer served in the 59th MP company, the 558th MP company guarding Ammo Depots in Pusan, Korea, and the 11th Field Artillery Battalion 24th Infantry Division along the demilitarized zone north of Seoul, Korea.  He was discharged and returned home in May of 1956.

After the ceremony each of the Legion members saluted Dyer and honored him for his service.  Audience members also took the opportunity to thank Dyer for his sacrifice to his country.