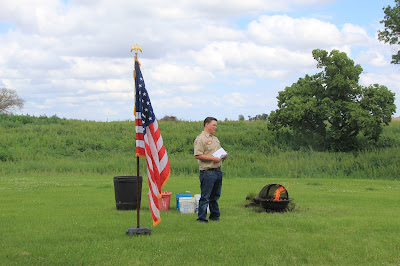 William Yokel addresses the crowd at the flag retirement ceremony that was a part of his Eagle project. 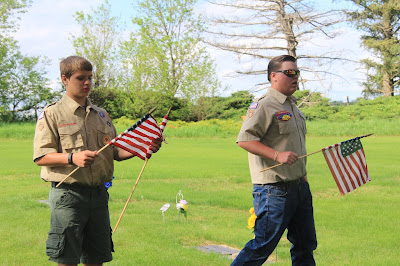 William Yokel, right, directs the scouts, including Mikey Bartu (left) in removing the flags from Andrews cemetery at the end of Memorial Day.

William Yokel decided to go all in for his Eagle project to help one of the organizations he appreciates the most, the American Legion.

Yokel, who just completed his junior year at Friend High School, is active in theatre, FFA, band and choir, joined Cub Scouts when he was in first grade.

He earned his arrow of light (the highest award in Cub Scouts) and crossed over into Boy Scout Troop 270 when he was in fifth grade and transferred to Boy Scout Troop 218 in Exeter several years ago.  He currently serves as Senior Patrol leader for the troop.

Scouting has meant a great deal to this busy teen, “Scouting has taught me how to use the scout laws in my daily life. It’s taught me skills I wouldn’t have learned otherwise.”

Scouting has not always been easy.  He found the Personal Management merit badge, in which scouts learn about finances and keep track of their own spending and earning, the most challenging, “We take all the money we make and receive for granted and we don’t know how to use it or save it.  It’s a perfect skill to learn.”

In January Yokel began looking for an Eagle scout project which would meet the criteria of the rank, “While a Life Scout, plan, develop, and give leadership to others in a service project helpful to any religious institution, any school, or your community.”

He initially spoke with the American Legion, as he is a member of the Sons of the American Legion Post 183 in Friend.  He had the idea to help with the placement of flags at the cemetery for Memorial Day.  That idea expanded to include not only Andrews cemetery, south of Friend, but flag placement at three other local rural cemetery locations and a flag retirement ceremony.

Yokel explained his choice of the Legion, “The American Legion was always my top choice because I appreciate veterans and the sacrifice they give.  I chose it because it was a honorable thing to the fallen veterans and with the flag retirement, it is a symbol to the freedom we all share.”

Yokel headed up the crew that placed the flags early in the week in the Friend area and then recruited members of his Boy Scout troop to help with the flag retirement ceremony on Monday, May 27th  at Andrews Cemetery.

Yokel led a moving and solemn ceremony as 20 flags were retired during the hour long ceremony.  After the ceremony, Yokel directed the scouts and volunteers in removing the memorial flags from Andrews cemetery.

Legion member Ron Corbett has been in charge of the flag placement for the last ten years and was very happy to see Yokel volunteer with the flags. “ It’s quite a job for all of us legionnaires to do it. There are about six or eight of us who usually do it and it was great to have him do it.  It gave us a year off.”

Corbett added, “He (Yokel) had helped us before so he had an idea of how we do it.  We were out there and supervised him.  No one told us we missed a grave.  We put out about 400 flags We are very happy William chose this project. It’s very important to the veterans and the Legionnaires.”

The most challenging task for Yokel in his project was trying to “Keep the volunteers on task and making sure we didn’t miss anyone when we placed the flag.”

Troop 218 Scoutmaster Dean Bartu commended Yokel on his project and his leadership in the troop, “William has been a great example of leadership to our troop and his project has utilized his organizational skills.  He did an excellent job showing respect for our country and its symbol in his project.”

Yokel plans to continue coordinating the flags for Memorial Day for the foreseeable future. He is looking to “ try to use the cemetery directory as a map to help identify veterans graves in the future.”
After completing the necessary paperwork, Yokel hopes to complete his Eagle board of review this summer.