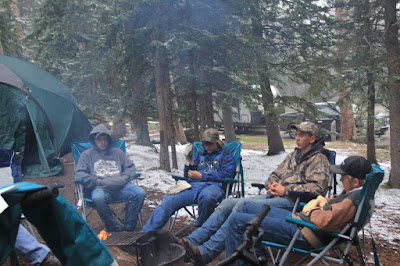 Scouts in Troop 218 warmed up around the fire before making supper.  The next morning they had four inches of snow on their tents and had to leave that day before the foot of predicted snow arrived making mountain driving conditions unsafe.  Pictured from the left are Mikey Bartu, Ben Bartu, Clint Oldehoeft and Braden Capek. 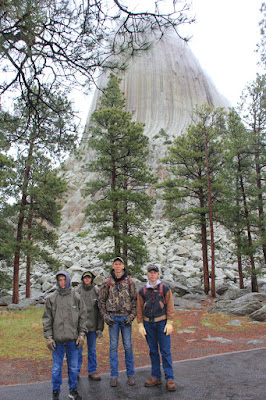 Members of Troop 218 stopped for a photo before hiking around Devil’s Tower (in the background).  Pictured from the left are Mikey Bartu, Ben Bartu, Clint Oldehoeft and Braden Capek.  The scouts climbed over the rocks to the base of the tower in addition to the hike around the tower. 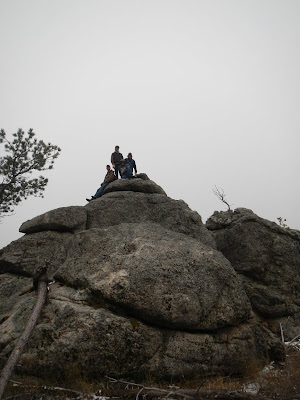 Boy Scouts in Troop 218 did some hiking on the trip through Western Nebraska, South Dakota and Wyoming.  Pictured from the left are Clint Oldehoeft, Braden Capek, Mikey Bartu and Ben Bartu

The scouts, Braden Capek, Clint Oldehoeft, Ben and Mikey Bartu and their leaders, Dean and Leesa Bartu, left Exeter on Saturday, May 18th.  First on their itinerary was a stop in North Platte, Neb. at the Golden Spike Tower where they learned about the largest railyard in the United States.

From there the group traveled to Bayard, Neb. to visit National Monument Chimney Rock.  The troop toured the facility and experienced the challenges of loading a wagon to take on the trail.  From there the troop traveled to Alliance, Neb. to see Carhenge.  The boys enjoyed examining the additional metal sculptures at the Carhenge sight.

The first night on the trip was at the beautiful Chadron State Park.  After a quick supper the troop settled for the night and awoke to snow on the ground.  It was a chilly morning so the troop packed up quickly and headed out to their next destination, Custer State Park.

Just outside of Custer State Park the scouts took a detour to Wind Cave State Park.  The group toured the cave, and especially enjoyed the elevator ride back up out of the cave.

At Custer State Park they drove the wildlife loop and enjoyed stopping to watch a large buffalo herd and their calves cross the road.  They also enjoyed feeding the resident donkeys.  They headed to their campsite at Sylvan Lake to set up tents on the snow there.  The scouts hiked to a peak in that area and planned to hike Black Elk Peak the next day.

After waking up to four inches of snow on their tents the troop had to make the decision to forgo their planned trip to Black Elk Peak because of the foot of snow that was predicted.  Instead the group left a day early and made a stop at Crazy Horse where the snow stopped just long enough to get a glimpse of the carving.  They also stopped at Mount Rushmore but didn’t ever get a clear view of the monument because of the snow and fog.

That evening the scouts spent the night in a restored caboose near Piedmont, SD and laid their tents out to dry.  Snow once again found the troop as they were barely able to get the van and trailer out of the driveway.  As they headed to Sturgis, SD the rain came and so the troop found the Motorcycle Museum and Hall of Fame to entertain them.  They stopped in Spearfish, SD for a quick lunch and headed to Wyoming.

Next on the itinerary was a stop in Gillette, WY to see the large coal mines.  Unfortunately tours were not available until later in the week but the scouts were able to see some of the mine and equipment from a viewing spot.  Older mining equipment was also displayed in another part of town.

The troop camped in Douglas, WY overnight in the snow once again.  In the morning the troop headed east for a stop at Fort Laramie National Historic Site.  After watching a brief historical film the group toured the well restored grounds.  After lunch the troop headed east again stopping in Cabela’s in Sidney before heading to Ole’s in Paxton for supper.

After camping in North Platte for the evening the scouts opted to visit Pioneer Village in Minden before heading home on Thursday, May 23.  The scouts planned all of the meals and did all of the cooking to complete items on the cooking and camping merit badge.