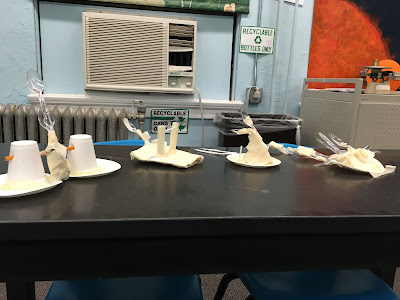 Recently in Physical Science, our student’s engineering skills were put to the test. During our study of projectile motion the students were challenged to create a catapult using plastic spoons, paper plates, tape, and a few other miscellaneous items. Their goal was to make a catapult that could accurately fire a cheese ball projectile to a given distance. The distance was unknown until the time of the challenge, so repeated testing was necessary to calibrate the catapult. All of the catapults functioned, but the design created by Wesley Ronne and Ben Bartu was able to hit its desired target. The students learned the value of testing designs before they are called into use. They also found that the speed and launch angle of the projectile are equally important for an accurate shot. Creativity and teamwork were very much on display with this energetic group, and I know that they will use those qualities well to represent our communities in the coming years!

Pictured are several examples of the catapults.
Posted by Leesa Bartu at 7:30 AM