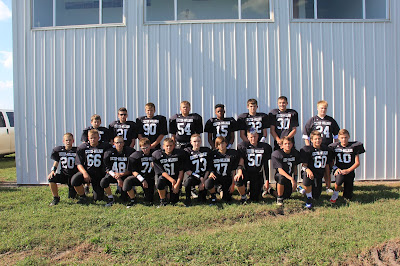 EMF Junior High Football had a very successful season with a good combination of young men from Friend and Exeter-Milligan.  The coaches enjoyed watching the players develop this season, especially as Coach Jay Hitchcock had coached many of them in pee wee football.

The year started with a lot of excitement and optimism and the first game began with a big lead at home against Diller-Odell. The younger students on second string played more snaps that the first string and scored several times against their first string defense.


The next game was against East Butler at Dwight. Again, the second string got a large amount of playing time and scored twice against their first string defense.  EMF wins the game 56-18.

The next contest was against Thayer Central at Milligan which got off to a fast start with EMF getting a large lead early. Thayer Central was able to score against the EMF defense due to broken assignments on option plays and the second string getting the chance for more experience. EMF wins again 50-36.


Meridian was the next challenge for the EMF squad. During warmups the Bobcats coaches were concerned with the size if the Meridian players but EMF controlled the game from the start. EMF executed to perfection several wedge plays for long gains against the large interior line. Another win for the Bobcats as the final was 60-6.

Heartland was next on the schedule for EMF. The game was a battle from the beginning with the Bobcats coming out on top with a final of 56-52. Hitchcock commented, "This was a very good win for us as Heartland was a physically superior team but we were able to beat them by working together as a team. We made a couple of huge first downs to run out the clock at the end of the game."

The final game of the season was scheduled against Osceola-High Plains at Milligan but was changed at the last minute to Osceola because of the snow in Milligan. "Osceola-High Plains was a very talented team and proved to be a very tough adversary." noted Hitchcock.

Although EMF fought hard some untimely penalties and turnovers cost the Bobcats the game with a final of 52-36.


The team ended up with a 5-1 record.  Coach Treven Cerveny and Hitchcock ended the season "very proud of the team. We appreciated how coachable and hard working they are.  We are fortunate to coach such a fun bunch of guys."