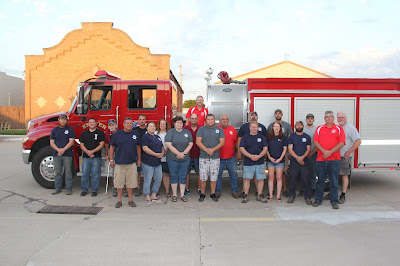 The Exeter Volunteer Fire Department has seen some changes this year.  Long time Fire Chief John Mueller notified the department he would be stepping down from his position.  In January, the department held their elections and Ken Strate was elected Fire Chief.

Strate is focusing on training for this year.  “With the way the state and federal laws are coming down we have to have more certified in different fields to keep up with what they require.”

“We are here for the community as volunteers doing this because we want to help and take care of the community .  It’s tough being a volunteer and having time to do all of the training we need to do.  My goal as the Fire Chief this year is to get the department to where it needs to be and still provide good community service.”

Serving alongside the Strates’s are assistant fire chiefs Dylan Axline, Nate Kahler and Alan Michl.
The department is looking at the possibility of replacing the attack truck as a medium range goal and potentially a new rescue unit.  According to Hope Strate, “We just need some upgrades.  Internally it (the rescue unit)works fine but the wear and tear and the rust are showing its age.”

One of the upgrades the rescue captain would like to see is “a cot that automatically loads with no strain to the EMT’s but it is $25,000 to retrofit to our current unit.  However, it makes it easier for three or four people to do the job of five or six.”

Hope also serves as the training officer and reports that the department is alternating training at their monthly meeting.  One month they focus on rescue training and the next month is fire.

“We’ve had everything from Burlington Northern who came and did a presentation about how to handle situations with the trains, even how to tell what’s in the cars, to refresher and newbie training on the SCBA breathing apparatus training.”

This year the department has held storm spotter training in multiple locations, had two house burns and hosted a Hazardous Materials awareness class taught by the state fire marshal.  Eight members of the department went to fire school this year.

The department again hosted a summer weekend celebration with the Sons of the American Legion in Exeter.  The festival held downtown included a car show, parade and evening meal which featured a polka band. This year the department added a bake sale with a celebrity baking auction which was very successful.