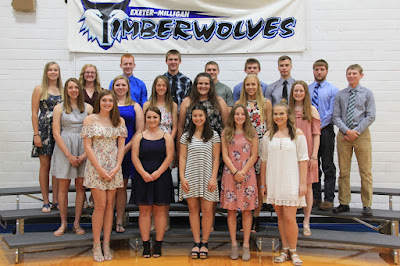 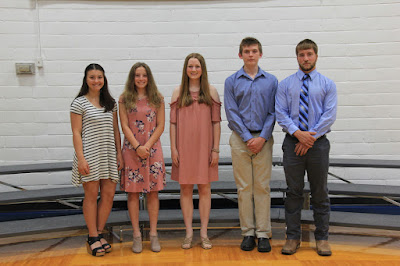 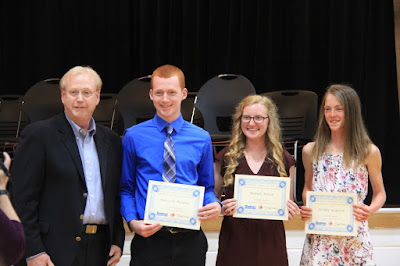 Michael Morris with SENCAP (Southeast Nebraska Career Academy Partnership) presented (l-r) Patrick Murphy, Hannah Horne and Kelsey Bigelow with certificates for having three of the top ten websites in the area.  Murphy was also honored as the top SENCAP student in the region of eight schools. 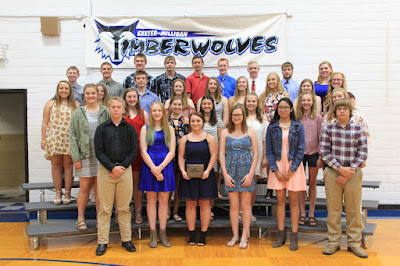 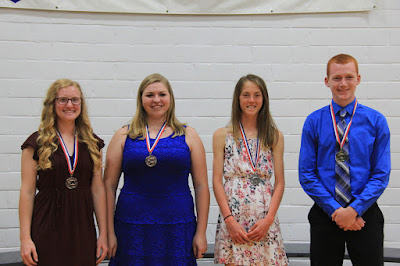 The Crossroads Conference recognized students with medals in their performance on the ACT this year.  From the left are Hannah Horne (bronze), Alexis Uldrich (bronze), Kelsey Bigelow (silver) and Patrick Murphy (gold). 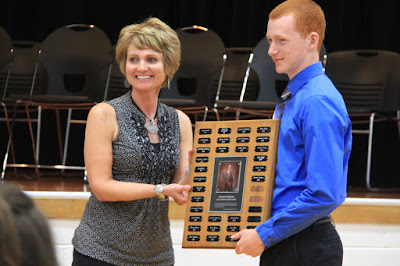 Exeter-Milligan recognized the outstanding accomplishments of their students during Honors Night on Monday, May 7.

Michael Morris, from the Southeast Nebraska Career Academy Program (SENCAP) was present to recognize three seniors who ranked in the top ten in the program for the website they created.  Patrick Murphy, Kelsey Bigelow and Hannah Horne were recognized and Murphy was recognized as the top SENCAP student in the region of eight area schools.

Mrs. Murphy, band and vocal instructor, gave the audience a brief review of the year’s music events.  The highlight of the year was the band receiving a superior ranking from all three judges at the district music contest.  Braden Capek was given the Director’s award with the most band points for an eighth grader and Hannah Horne received the Louis Armstrong Jazz Award for her contributions to the Exeter-Milligan jazz band.
Murphy presented Kaitlyn Vavra with the Semper Fidelis award with the second highest amount of letter points with Hannah Horne receiving the John Phillips Sousa award for the most letter points in band.

Mrs. Vossler gave an overview of the Family Career Community Leaders of America activities for the year.  The group was busy with roadside cleanup, a Valentine’s dance, their food collection at Halloween, along with their district and state conferences.  FCCLA also had several STAR projects qualify for the state competition this year.

Mrs. Kanode presented the art awards, recognizing the students who had won at different competitions and those who were instrumental in making the Family  Art Night a success.  She presented Alexis Uldrich with the artist of the year award.

They also presented the Citizenship awards from the American Legion and Auxiliary to Tara Mueller and Joey Bartu.  Derek Axline received the All School Citizenship award and Patrick Murphy was recognized as the Neil Hassler Outstanding Senior.

After presenting the citizenship awards Mrs. Kovanda presented the seniors with their scholarship packets before Mitchell Manning closed the evening.