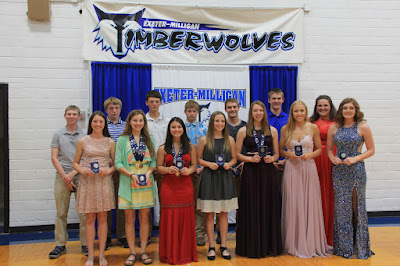 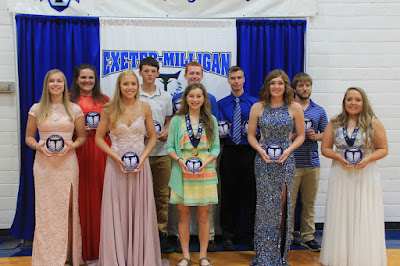 Exeter-Milligan held their annual Athletic Banquet in the Exeter gym on Tuesday evening.  Principal Laura Kroll welcomed the crowd and after a meal was shared, introduced the guest speaker Hunter Radenslaben.

Radenslaben started tweeting when he was twelve years old and now, at the age of 19, has over 82,000 followers.  He founded the @AthleteNationCo which primarily shares inspirational stories with their roots in sports.

His message was how he used sports to cope with a difficult time in his life.  He saw how in his own life being involved in sports helped him during the death of his mother when he was a teenager.
After her death he found a note tucked away in her handwriting that read, “Help people.”

He realized he was “living my life for myself.  The noted opened my eyes to helping others.  To use my passion for sports to help people.  I share stories that deserve to be told.”

“Sports are providing the platform where we can share stories that are changing lives.  We can make a difference in a couple people’s lives.  How can that change the world?  It can start right here, right now in a small town.”

After Radenslaben spoke the banquet began with Lorie Sliefert, assistant softball coach, reading a note from Aarlon Lauby, Fillmore Central/Exeter-Milligan softball coach.  Each player was recognized along with their accomplishments and Josie Kresak received the Leonard Kassik softball player of the year trophy.

Football Coach Dean Filipi noted his team this year was small and got smaller due to injuries but had a “never give up attitude with a willingness to play wherever needed.  Sometimes they played several different positions in one game.”

The players, student managers and support staff were recognized and Joey Bartu was recognized as the football player of the year.

Darcy White, volleyball coach, introduced her state championship team, “We had an amazing season. . . we only had 10 players who worked like a team of twenty.”

White shared the stats of each player as she had them come to the front.  She recognized Katie Mounce as the “unsung hero of the team.  She was probably the best thing that happened to Exeter-Milligan volleyball this season.”

Krejci introduced his team and shared some of the statistics that helped the team on their journey to finish third place at the state tournament. Tara Mueller received the Gary Ruhl female player of the year trophy.

Filipi returned to talk about the boys basketball team.  After thanking the student managers and others Filipi recognized the team and the honors they received throughout the season.  With a record of 20-6 they fell just short of getting a berth at the state tournament. Filipi mentioned there were a few games they could have used “five more minutes.”

Filipi introduced the golf team and briefly discussed the rest of the golf season.

Matt Nicholas introduced Macy Due, the golf team member and talked about their goals for next season.

Kanode returned to the stage to discuss junior high girls track before Katherine Smith gave a synopsis of the high school girls track season so far. The girls team has been very successful season and Smith looks forward to taking several competitors to the state meet.

Brian Murphy spoke about the junior high football, basketball and track teams.  He introduced the team members present and their records before discussing high school track.  He noted that the 2017 Walt Barkmeier Boys Track Trophy winner was Trystan Brandt and the 2018 winner has not been chosen.  Murphy introduced the high school track team and noted some of the accomplishments.