Students in Fillmore County schools got the opportunity to hear from a man who has coached and trained professional athletes for over 40 years.

John Underwood, founder of the Humanex project, a human performance project, spoke to the all Fillmore County high school students on Tuesday morning in Geneva and then spoke at all three  middle schools on Wednesday, February 21.

The group has trained the Navy seals, many professional sports teams as well as Olympic and college teams.  They have visited with Fillmore County students on several different occasions educating them on maximizing their performance in school and athletics.

His message to maximize their performance was clear, “Be positive and be prepared.”

He encouraged the students to set goals, “If you don’t have any goals even at this age, your life doesn’t have much direction.  After you find out you are good at something you have to put some work into it.”

He emphasized that eight out of 100 people have a gene that allows them to “be great at something if they can find it and develop it.”

However, he noted that it takes a lot of work to succeed.  He talked about “The Talent Code. . .you become what you practice.”

He shared an abundance of information with the students in clear graphics identifying the dangers of drugs and alcohol on the brain, noting, “The United States is a train wreck as far as our health.”

Underwood dove into the factors students can control: what they put into their bodies and how much they sleep.

He showed the difference that sleep makes in performance with another set of brain scans.  Eight hours of sleep is essential for the best performance at any age.  He shared how a 20 minute nap can increase awareness and creativity levels by 40 percent.

He quipped, “You have to minimize stress to maximize performance.”

One of the stress factors he shared with the students was that of phone use.  He explained, “Using a phone causes brain stress, all of the information fills up our brains.”

In encouraging better performance in their schoolwork, Underwood helped them understand that “sleep is like hitting the save button on your memory.  Your brain converts info you learned during the day from short term memory to long term memory during sleep.”

The Exeter-Milligan middle school students spent a few moments after Underwood’s presentation to write down two points from his talk that they will put into practice.

Underwood was brought to Fillmore County by the Fillmore County Coalition and also hosted an evening session to share his presentation with parents and community members. 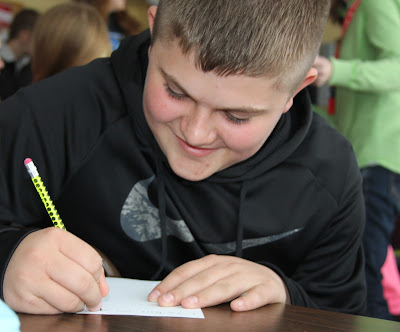 Peyton Pribyl writes two items that he learned from the presentation on human performance.