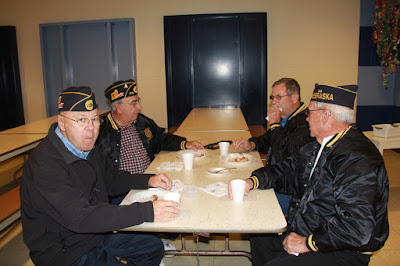 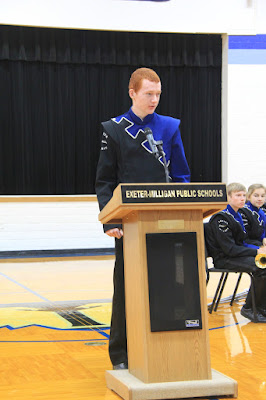 Senior Patrick Murphy welcomed the audience at the Exeter-Milligan Veteran’s Day Program on Monday in Exeter. 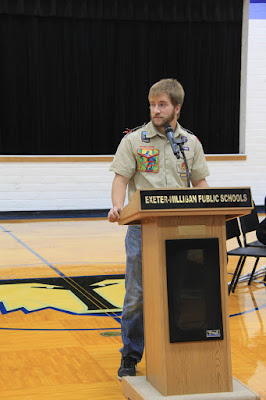 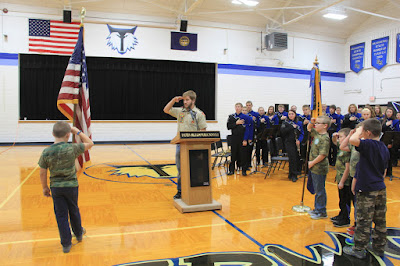 Exeter-Milligan held their Veteran’s day program on Monday, November 13 due to their participation in the volleyball state finals.

The program was opened by a welcome from Patrick Murphy before Boy Scout Joey Bartu led the flag ceremony.  Members of Cub Scout Pack 218 were the flag bearers and color guard.

The Exeter-Milligan band played “The Star Spangled Banner” and the Senior High choir and the Friends of Vocal sang “God Bless America.”

Superintendent Paul Sheffield, who currently has both of his sons serving in the military, gave the address.

Sheffield recalled the history of Veteran’s day before explaining that his goal was to “talk about four veterans who have influenced my life.”

He shared stories of the service of both his father and his father-in-law.  He said his father “ran our house like a ship.  It was tight and we learned discipline.”

Devin Sheffield, the younger son of the Sheffield’s, is currently in the Army and is stationed at Fort Campbell after being deployed overseas twice.  Older son Brett Sheffield, is in Navy school to be an Aviation Rescue Swimmer and started his training at Norfolk, Virginia on Monday.

Sheffield reminded the crowd that because of those who have served and are serving, “you can go home today and enjoy food on your table, we can gather here today.  We live in the greatest country in the world.”

He closed by thanking the veterans in the crowd for their “service, sacrifice, duty and honor and saying yes to Uncle Sam.”

The junior high choir sang “America, Of Thee I Sing!” and joined the senior high choir for “Inscription of Hope” before the band played “Sweet Land of Liberty” and “America’s Finest” asking the veterans in the audience to stand when they heard the anthem of the branch they served.

Hannah Horne closed the program, thanking the veterans and wishing all safe travels. 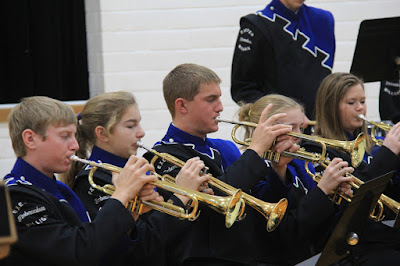 Above - On their trumpets are Exeter-Milligan band members (from the left) Trever Zelenka, Jaiden Papik, Mitchell Manning, Cameran Jansky and Daisy Kanode.
Below – Superintendent Paul Sheffield spoke at the Exeter-Milligan Veteran’s Day Program on Monday in Exeter. 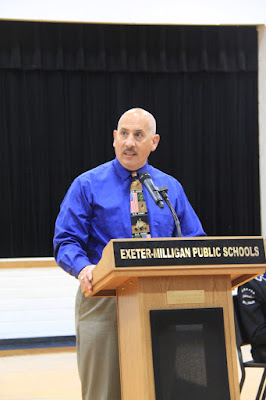 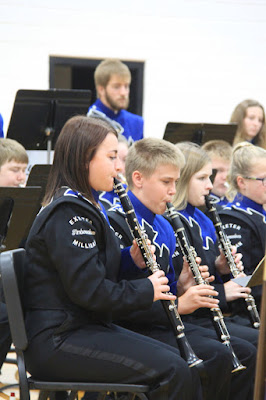 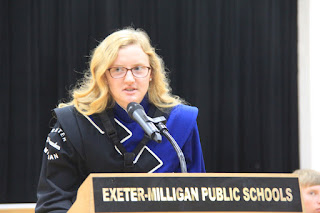 Senior Hannah Horne gives the closing at the Exeter-Milligan Veteran’s Day Program on Monday in Exeter.
Posted by Leesa Bartu at 7:00 AM