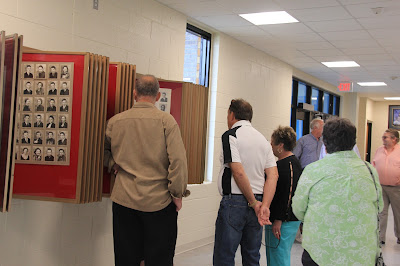 Alumni enjoyed their tour of the school and especially enjoyed the class photos. 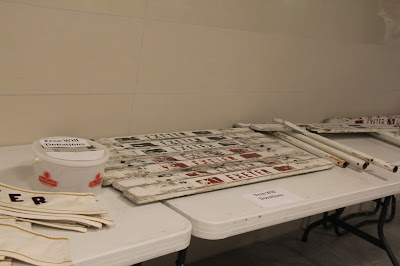 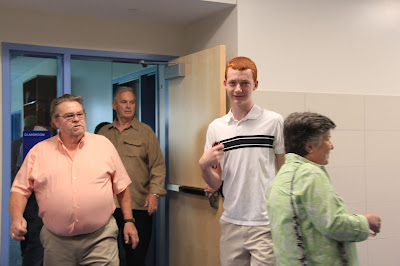 Exeter-Milligan Senior Patrick Murphy was one of the students who gave tours of the school before the alumni banquet.

The Exeter/Exeter-Milligan alumni banquet was well attended in the Exeter gym on Saturday, May 28th.  The event, hosted by the ten year class, was opened by the class of 2007 president Sage Jensen.   Kyler Sharp gave the welcome and mentioned how impressed he was with the new addition, “the efforts that were done here were mind blowing.”

Prior to the banquet the school was open for tours given by current Exeter-Milligan students.
Father Thomlison blessed the food which was catered by Greg’s Market in Exeter.

After the meal Jensen introduced Jerry Volkmer, from the class of 1967, who introduced each class.

Special recognition was given to Marjorie Tauriella, a 1937 graduate, who was present for the evening with her daughter, Nancy Tauriella Ruhl, who was a member of the class of 1967.

After the business meeting concluded the audience was reminded of the Fat Penny tournament being held with the Milligan alumni association on Sunday afternoon.

The golf tournament scheduled for Saturday morning was postponed to Sunday but many enjoyed the dance at the Legion afterward. 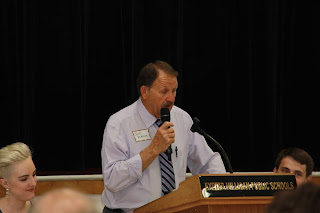 Jerry Volkmer introduced each honor class at the alumni banquet.
Posted by Leesa Bartu at 7:30 AM