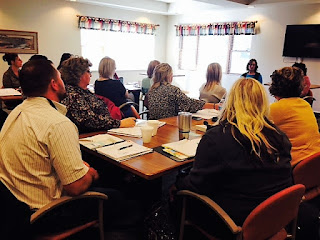 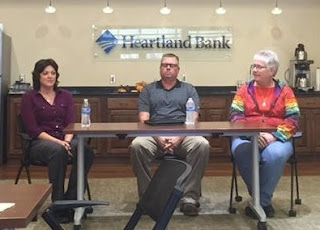 FILLMORE COUNTY - The Odegeo…Leadership for Fillmore County class attended the “Government-Power of the People” November 15, 2016.

The class toured the Fillmore County East building and saw the lay-out of the many offices there. Amy Nelson, who gave the tour of the facility, spoke for the zoning administrator about  how zoning works in Fillmore County.

Following that the group learned about public power as they listened to Craig Vincent, Nebraska Public Power District (NPPD), Account Manager. The class continued discussion as they ate lunch that was sponsored by NPPD.

In the afternoon the group traveled to the Fillmore County Courthouse where President Fillmore greeted the group. Patt Lentfer, FCDC Executive Director, briefly outlined economic development at the local, regional and state level.  Monica Braun from REAP (Rural Enterprise Assistance Project) shared information how she and her organization works with small businesses and entrepreneurs.

A school board panel consisting of Local school board members Kendra Jansky from Exeter-Milligan, Sherri Nun from Fillmore Central and Dan Miller from Shickley were on a panel to provide information about how schools are run and the role of the board members in working with the administrators and the community.

Persons interested in learning more about Odegeo…Leadership for Fillmore County may contact the Development Corporation at 759-4910,  email lentfer.fcdc@genevamail.com or go to www.fillmorecountydevelopment.org.
Posted by Leesa Bartu at 7:30 AM