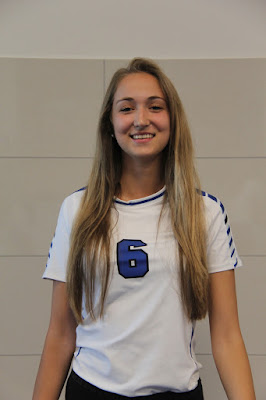 Giada Miniussi came to America to “see what is outside of Italy and open my mind.”

Coming from Trieste, which is a smaller town near Venice (small like Lincoln, according to Miniussi),  she has adapted well to living in Exeter with host parents, Larry and Bonnie Cudaback.

So far, Miniussi has not experienced any homesickness.  She misses her family, friends and pizza and pasta but has enjoyed tasting the different foods here.  “They told me there would be all junk food before I came but Bonnie makes really good food.  I really like how she cooks.”

Miniussi is also enjoying her extended host family, including the Cudaback’s granddaughters, senior Sydney Hall and sophomore K K White. She plays volleyball for Exeter-Milligan with the girls.  The daily practice is a new experience for her as she was on a club team in Italy that practiced two or three days a week.  She is looking forward to basketball and track season as new experiences for her.
She hopes to go on a ski trip to Colorado and visit the Cudaback’s daughter in Kentucky this year.

She has enjoyed four wheeling and tubing at the lake with the Cudaback and their extended family.  When the school year is over she hopes to travel America coast to coast with her parents.

In Italy, Miniussi goes to a Slovanian school and the village where she lives has a predominantly Slovanian population since it is near the border of Italy.  Her mother’s family is Slovanian and so she speaks the language as well.

This year in America will count toward her five years of high school but she may have to do some tests to advance.  She will have one more year of high school when she returns.  She had planned to go to business school and learn French but now after taking the health tour during career day she is learning in that direction.

While she is still struggling a little bit with the language, Miniussi is enjoying her year at Exeter-Milligan.