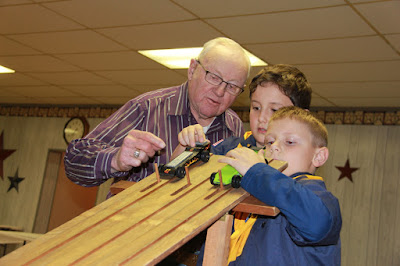 Above – Robert Rhodes helps wolf scouts Ronnie Babula (middle) and Logan Krupicka line up their Pinewood Derby cars on the track.
Below – The Exeter Cub Scout Pack 218 members with their cars from the left are Logan Krupicka, Ronnie Babula, Troy Kallhoff, Mikey Bartu and Devin Harrison. 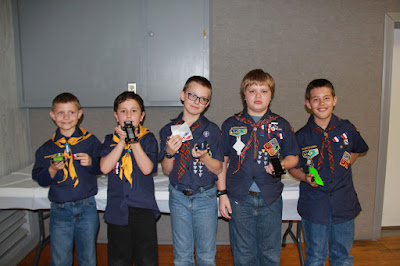 Exeter Cub Scouts celebrated their birth of the Boy Scouts of America on Sunday, March 13 in Exeter.

The evening began with a potluck supper before a brief Friends of Scouting presentation by Georgia Schropfer of Fairmont.

Sticking with their theme for the evening, which was Minecraft, the scouts presented two skits with a creeper present in both.

The final highlight of the evening was the Pinewood Derby.  The boys, with help from their family, had created some very nice cars to race.  Winning all of his races was Harrison with Kallhoff right behind him.  In third place was Babula.  In the show portion of the competition Bartu took first place in stock show with Kallhoff in second, and Harrison in third.  Krupicka was first in Modified show and Babula was second.

Lance Larsen coordinated the Pinewood Derby and served as the show judge along with Robert Rhodes.  Bernie Stych assisted in the track assembly and the race.  Volunteer judges at the end of the track were Margie Johnson and Colleen Foote.

The scouts are looking forward to planning their campout in June.