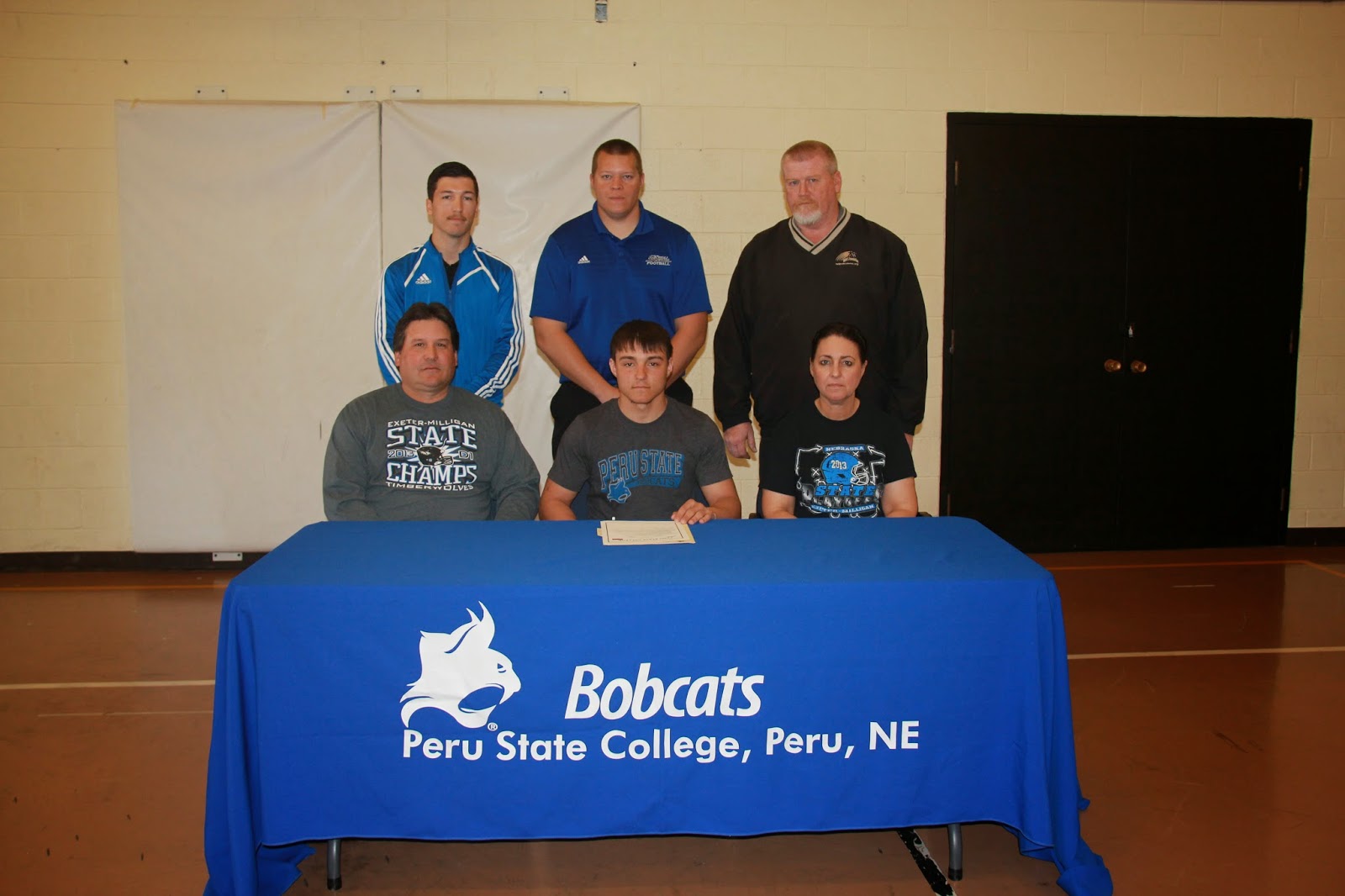 Exeter-Milligan running back and quarterback James Sluka likes to take the ball and run with it.  He plans to bring the same go-getter attitude to Peru State University this fall.

Sluka signed with Peru State on Thursday, April 17th looking forward to contributing as a member of their Special Teams and as a runningback, a position he knows well after helping the Exeter-Milligan Timberwolves to a D-1 State Championship last fall.

“I like Peru State because they are a smaller school, similar to Exeter-Milligan.  Their offense is great, a triple offense and I have a good shot at contributing to their special teams, especially returning punts,” explained Sluka.

The NAIA school has recently renovated their stadium and with a new coach in place the program is off and running.

Exeter-Milligan Athletic Director and Football Coach Dean Filipi sees success for Sluka at the college level, “I think he has a great set of hands as well as running ability.  He’s got good durability combined with his quickness and elusiveness.  He’s got a real knack for special teams.”

When Sluka was asked how playing at Exeter-Milligan prepared him for playing college football he answered, “Winning.  Just winning a lot gave me the confidence to play in college.”
Present at the signing were Peru State Running backs Coach Jared Olive and Assistant Coach/Offensive Line Coach Andy Kohls.

Both were thrilled to bring Sluka into the Bobcat family, Kohls noted, “He’s a good kid.  He’s a good competitor, a well-rounded student with character and classroom skills.”

Olive mentioned Sluka’s playmaking ability, “our entire staff got to watch him at the State Football championship game.  That is one of the largest stages for a high school player to perform on and he really made some plays there that stuck with us.”

Kohls feels, “Sluka will be a good fit.  We will find a great spot for him.  We have just started recruiting heavily in the last few years with our new head coach.  We have started seeing the fruits of that and look forward to a successful season.”

Sluka plans to major in Wildlife Ecology with a minor in Sports Management.  As a member of the Exeter-Milligan team Sluka was chosen for the All State D-1 Teams by both the Omaha World Herald and the Lincoln Journal Star.  The York News Times selected Sluka as one of the Co-Captains of their All-Area Team.