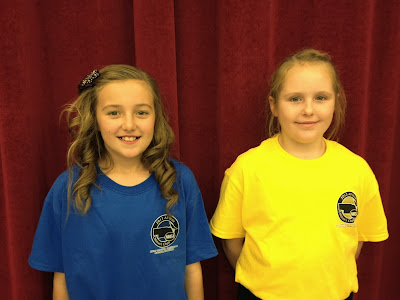 Every other year, approximately 350 fourth and fifth graders in the state of Nebraska are nominated by their classroom teacher to participate in the Nebraska All-State Children’s Choir, sponsored by the Nebraska Music Educators Association. Selection as a member of this group is one of the highest musical honors attainable in Nebraska. Mrs. Judy Welch, Children’s Choir Coordinator, for the Nebraska Music Educators Association, is pleased to announce that Katelyn Babula and Briana Capek were among the 350 students selected to be a part of the 2013 All-State Children’s Chorus. Guest conductor for the group was Emily Crocker, Conductor of the Vocal Arts Academy of Milwaukee and internationally known musical composer and arranger.  The chorus rehearsed Thursday, November 21st on the University of Nebraska-Lincoln campus, the host site of the 2013 NMEA Conference/Clinic. A final public concert was held on Thursday, November 21st at 4:00 pm at the Lied Center for the Performing Arts on the University of Nebraska-Lincoln campus.

Pictured are Katelyn Babula (left) and Briana Capek (right) before their concert
Posted by Leesa Bartu at 7:30 AM