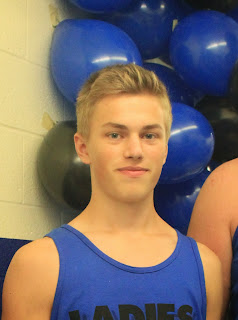 There’s nothing like moving from a community of 2.5 million to Exeter, Neb. population, 600.
Late this summer Felix Richter made that trek from his home in Munich, Germany to his home for the year in Nebraska with the Paul Sheffield family.

On his way to Nebraska, Richter spent two weeks in Rhode Island at a prep camp for foreign exchange students, “I got out of school in Germany and decided I wanted to go to the camp.”

There have been some adjustments for Richter, the biggest is “being at school the whole day and sports, having them at school instead of club teams.  Sports is so much bigger here and there is so much corn here.”
“I like the way that people live over here. There is so much school stuff here.  It’s all different in some ways.  Friday night football is a big deal and I like that.”

Richter, 16, misses his 17 year old sister and his parents back in Munich. Since he arrived in Nebraska he has been able to Skype with his family, “I don’t really miss anything yet.  I am happy to have a host brother and sister and am really enjoying that.”

The Sheffield’s have been pleased with the way Felix has adjusted, “Felix has been a great fit into our family.  We enjoy having him and he has already been labeled the "good" son - it seems he knows how to load/empty a dishwasher without being told. We hope he is enjoying his time as being a part of the Sheffield family and also his time as a Timberwolf.”

He hopes to go back to Germany after his year here and finish one more of school there before returning to the United States to pursue a medical degree, “I like Nebraska but there are other cool states, I have no idea where I would go to school.”

Although his school work in Nebraska doesn’t count back in Germany he is enjoying it.  “I could have graduated last year and gone to work but since I want to go into the medical field I will go back for two more years before college.”

At Exeter-Milligan Richter is taking American History, English, Math and science and likes it all so far. “I really like having computers at school to keep all of your notes together, that’s good.”

He started playing on the football team but switched to being a student manager when a past injury haunted him.  He’s really looking forward to basketball season which was his sport in Germany.

So far Richter has taken a trip to Minnesota with the Sheffield’s to go pheasant hunting.  “I didn’t hunt here in the U.S. because I didn’t have a license but that was pretty fun.”

The Sheffield’s are planning to include Richter on some of their travels through the United States while he is visiting with them and Richter is definitely looking forward to seeing the beauty of the country firsthand.