Exeter 14 & Under Team Takes 4th at State at Softball 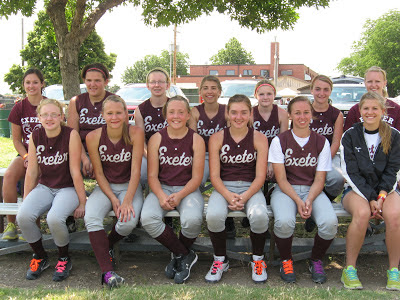 The Exeter Eagles ended their softball season on June 30th at Class D State Softball in Grand Island.  The girls fought hard throughout the tournament and went 4-2 at state.  They played Louisville, Syracuse (twice), Verdigre, Grand Island Illusion’s Gold, and Auburn.  The season record for the Exeter Eagles was 18-6.  Exeter played in the FunFrAll league that consisted of Exeter, York, Dorchester, Meridian, Wilber 1, and Wilber 2.  The league tournament was June 24-27 in Dorchester.  They had to play Meridian twice on the 27th in order to win the tournament.  The girls pulled through and brought home the victories! The Exeter Eagles 14 and Under softball team had a very successful season!
Posted by Leesa Bartu at 7:30 AM