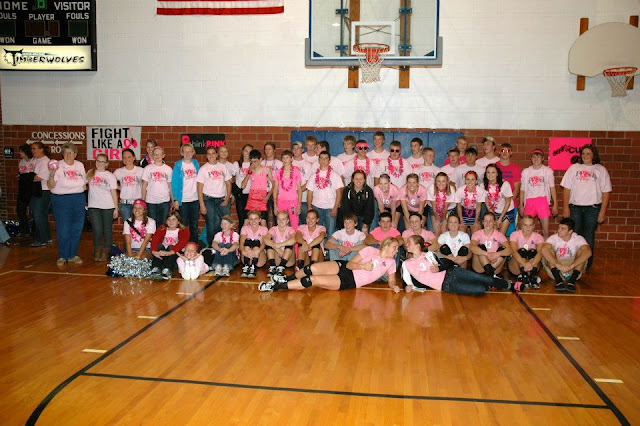 To the kind and generous people in the Exeter and Milligan communities:

Last summer I heard the words, “may be cancer” and then the word, “cancer” alone; a scary and unpleasant word.

At first I kept it to myself and told very few, until “chemo” was introduced to my vocabulary. If I was going to beat the cancer, chemo would become a realty. At that point, I realized that not just a few would know but everyone would know because I would loose my hair.

The time came when I decided to tell my students. What a tough day that it was! I started by asking if anyone knew what a bad hair day was or if they ever had one. Then I asked what the worst hair day would be? During third period, one student said, “having no hair”; so I shared, “that is what is going to happen to me”!

Last Tuesday night I was amazed and honored with the support from the Exeter-Milligan   Public Schools, and the people that “grace” these two towns. Mrs. Darcy White told me that the volleyball girls wanted to do a pink out for me at the last home game. I wasn’t aware of the T-shirts being sold until I was getting groceries at Greg’s, one Sunday morning. To say the least, I was a little embarrassed. Then later I heard about the bake sale.

The number of T-shirts sold was close to 200, and the bake sale was very successful. I want to thank everyone for their generosity, and the overwhelming support I have been given at this time in my journey in life. I especially want to thank Mrs. Darcy White, the volleyball team, Mrs. Mary Lou Vossler, Mr. Paul Sheffield, and Mr. Lin Schlueter.

Thanks for your prayers and acts of kindness,
Mrs. Judy K. Votipka
Posted by Leesa Bartu at 7:30 AM