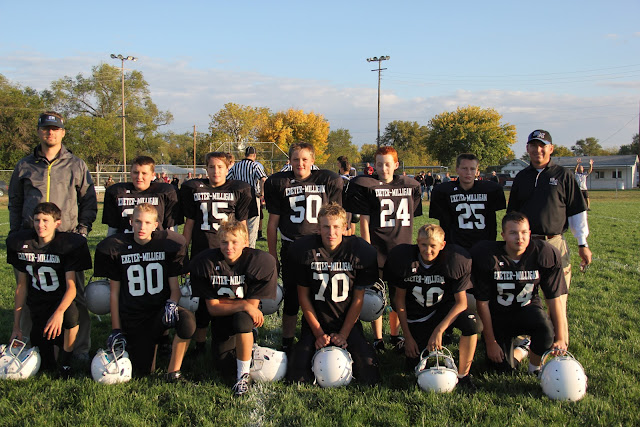 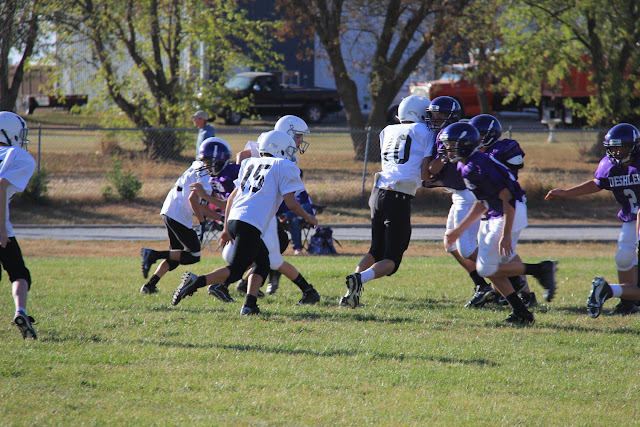 The Exeter-Milligan defense in action at Deshler. 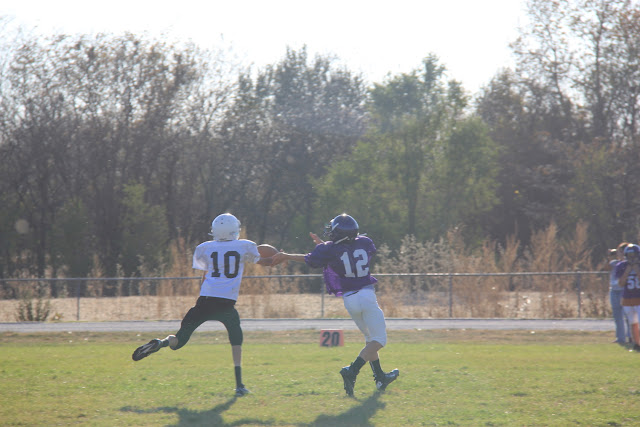 Evan Harre #10 catches the ball for an interception against Deshler. 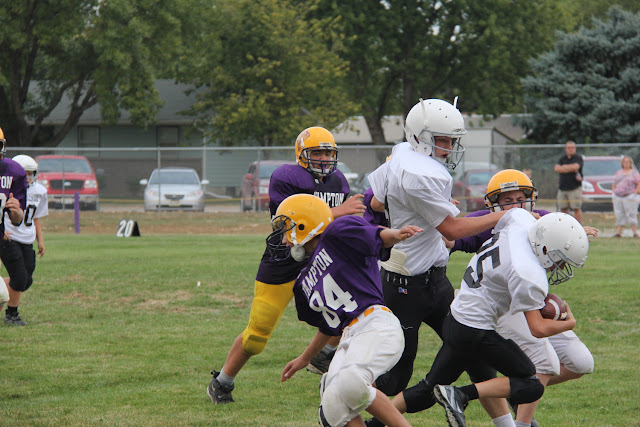 Eric Olsen #25 breaks several tackles with the help of Cameron White to head down the field for another touchdown in Hampton.

On September 11, the Timberwolves traveled to Dwight to take on East Butler.  Exeter-Milligan scored in the first quarter on a 1 yard touchdown run by Cameron White.  The 2-point conversion was ran in by Evan Harre.  EM was unable to score in the second quarter.  East Butler held a 16-8 halftime lead.  EM added a 14 yard TD run by Trevor Luzum in the third quarter.  East Butler added 16 points in the third and another 6 in the fourth to pull away.  EM was on the short end of the 14-38 final score.

Next, the young Timberwolves traveled to Friend on September 17.  Exeter-Milligan struggled against the Bulldogs.  The only touchdown for EM came in the second quarter when Cameron White ran 65 yards on a fake punt.  Eric Olsen threw to Trevor Luzum for the conversion.  EM fell to Friend 8-48.

Exeter-Milligan went on the road for the third straight week on September 24.  EM went to Hampton where the Timberwolves met a team that was similar in size.  In the first quarter, EM scored two touchdowns.  Cameron White recovered a fumble on defense, running the ball 28 yards and Trevor Luzum returned a punt 67 yards.  EM added to their lead in the second quarter on a 60 yard TD run by Eric Olsen.  White ran in the 2-point conversion.  In the third quarter, Luzum added two more returns for TDs.  The first was a 60 yard kick-off return.  The second was a 49 yard punt return.  Olsen ran in the 2-point conversion.  Hampton was able to score a TD in each of the last two quarters.  Luzum added a fumble recovery for the EM defense.  EM came away with its first win of the season 34-12.

On October 1, EM hosted its only home game of the season against Heartland.  EM was unable to score until late in the game when Eric Olsen scored on a 5 yard run.  EM fell to Heartland 6-44.

In the Timberwolves final game of the season, EM traveled south to Deshler on October 8.  It was a close game from start to finish.  Trevor Luzum scored for EM in the first quarter on a 48 yard TD run.  In the second quarter, Eric Olsen hit Cameron White for a 33 yard TD pass.  Evan Harre also added an interception on defense for EM in the second quarter.  EM was down at half 12-14.  In third quarter, Olsen broke loose on a 50 yard TD run.  EM held a slim 18-16 lead heading into the final quarter.  Deshler took the lead in the middle of the fourth 22-16.  EM then threw an interception on their following possession.  Deshler took over on offense looking to run out the clock.  But, with under two minutes remaining, White ripped the ball away from a Deshler running back and proceeded to run 36 yards in for a touchdown.  Olsen then threw to White for the conversion.  The EM defense held Deshler at the end of the game.  EM took home its second win of the season by a score of 26-22.
The Exeter-Milligan Junior High Football team completed its 2012 season with a 2-3 record.