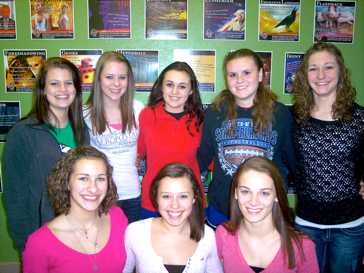 Speech Team notes by Jami Adelman
The Exeter-Milligan Speech Team gave a strong performance and finished in third place at the Meridian Speech Tournament on Saturday, February 11th. Special congratulations go to Becca Vossler, who placed first in persuasive speaking; Deidre Stevens, who placed first in entertainment speaking; and Liz Murphy and Deidre Stevens, who placed second in duet acting.  Liz Murphy also placed third in serious prose, and Toni Bossaller was awarded a fourth place medal in poetry. Overall, the team has revealed during competition that their abilities are improving significantly from their ongoing efforts to perfect their pieces. The team considers the comments from previous competitions valuable as each member prepares to face some very tough opponents in the upcoming meets. The speech team will compete in Sutton on Saturday, February 18th. The CRC competition will be Wednesday, February 22nd in Meridian, and the district competition will be in Deshler on March 15th. The Exeter-Milligan Speech Team also welcomes patrons to join them at their annual Speech Night on Monday, March 6th. On this night, students will perform their competition pieces for the public.
(Pictured: Elizabeth Murphy, Kylie Briske, Deidre Stevens, Becca Vossler, Jennifer Pribyl, Amber Pribyl, Meredith Emshoff, and Maitlyn Thomsen
Not Pictured: Toni Bossaller)
Posted by Leesa Bartu at 8:09 AM