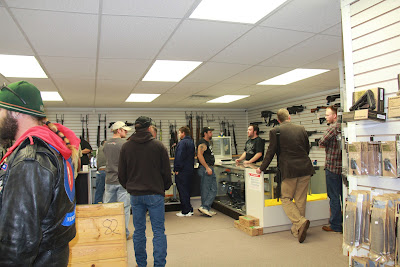 Exeter Arms held an Grand Opening on October 15th and had a large crowd all day. 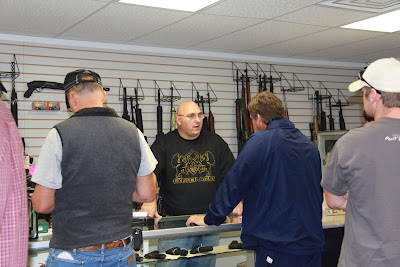 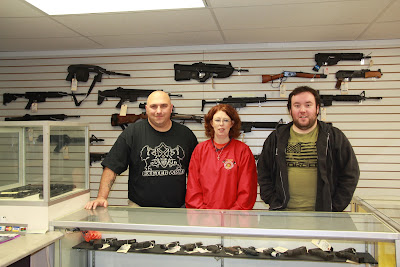 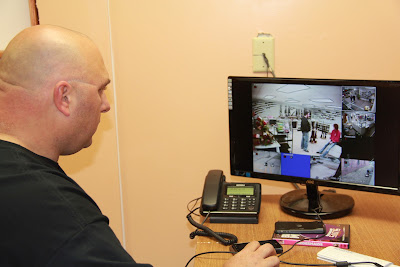 Rob Androyna shows the extensive video monitoring security system that monitors Exeter Arms.
After six years of a lucrative internet presence, Exeter Arms has now opened a retail outline in downtown Exeter.
Exeter Arms is a full line gun store offering everything from hand guns, long guns and hunting rifles to T-shirts and a complete line of accessories.
Owned by Rob and Hope Androyna the family has made Exeter their home for a number of years and they decided "Exeter would be a great place to have a business."
They purchased two buildings on the south edge of downtown Exeter and spent most of the summer remodeling the facility.  The biggest challenge, according to Rob, was the rezoning process.  Although the building was zoned for commercial due to the nature of their business they needed to add manufacturing to the zoning.  "Zoning went relatively smoothly. People had fears about having this type of business in town, but we have a very high security system," explained Rob.
The Androyna's have worked closely with the Fillmore County Development Corporation to open the retail outlet.  The FCDC helped them secure a small business loan, "FCDC helped ups get started and they along with First National Bank in Exeter have been very generous and supporting," according to Hope.
In addition to the facilities available at their storefront in downtown Exeter the business also have a machine gun range near Friend that they rent out by the hour.
Part of their facility in Exeter is dedicated to space for the full time gunsmith, Dan Piganell, to clean, repair and maintain most weapons.  Exeter Arms also custom builds weapons and will be manufacturing their own line of rifles and sound suppressors in the near future.
In the store you will find guns sold on consignment as well as used guns that have been inspected and are ready for use.  Of course, Hope commented that "All regular Federal Firearms License laws apply when purchasing at Exeter Arms."
Part of the service that Exeter Arms offers to the community is training for many of the arms that they sell.  They teach the Nebraska Concealed weapon carrying course and also offer training on the taser guns they sell.  In the spring the Androyna's hope to offer a Ladies night providing information  and instruction on personal protection for women.
In bringing their retail store to downtown Exeter the Androyna's have begun to achieve one of their goals which is to "bring jobs to town and also bring people into town which will benefit not only our business but hopefully the other businesses in town," explained Rob.
Throughout the process of opening their new store in Exeter the Androyna's have noted, "the great support from the community of Exeter as well as our regular customers."  Exeter Arms is open Tuesday through Saturday from 9 - 5 and until 8 p.m. on Wednesdays.
Posted by Leesa Bartu at 10:08 AM