Rhodes decide to hang up clerking hat after 1,450 auctions 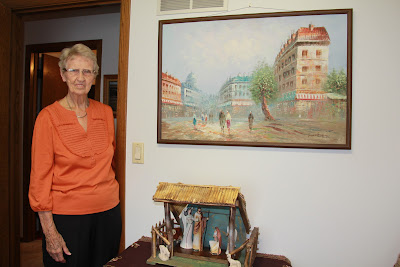 Pearle Rhodes with two of her new auction finds, a landscape painting and a nativity scene. 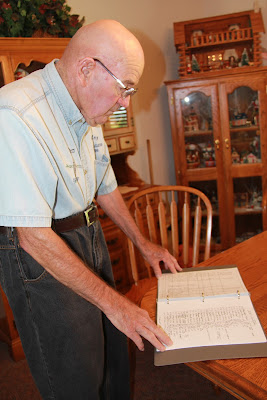 Stanley Rhodes with his notebook where he records every auction they worked and keeps notes on the outcomes and locations. 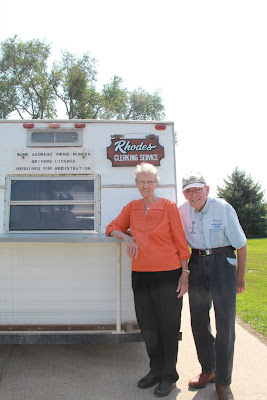 Pearle and Stanley Rhodes next to the clerking trailer they have just retired.
Rhodes Clerking has been an area institution for close to fifty years.  If you been to one of the last 1,450 auctions by Larsen and Associates you know the family behind the clerk trailer.  Stanley Rhodes has worked 1,450 auctions as a ringman and clerk and just recently decided to permanently park his clerking trailer.

Starting in 1959 Stanley began working with Engvert Larsen in the auction business. He began working as a ringman “taking bids and so forth” for Larsen until the local banks decided that they did not want to clerk for the auctions.

At that point Stanley took over the clerking end of the auction services, calling it Rhodes Clerking Service. His wife, Pearle, joined him in 1972, manning her station in a small travel trailer, passing out numbers and taking in payments for 477 auctions.

Over the years Rhodes has worked and clerked for three generations of the Larsen family. Engvert Larsen, who started his auction business in 1930, was the Larsen in charge when Rhodes started, later his son Darrol took over. These days Larsen and Associates is led by Darrol’s son, Lance.

Although they will miss being around the people, they are ready for retirement. “We’re 83 and 85 and its time to slow down. Our kids and grandkids keep us busy with all of them in Nebraska,” explained Pearle.
This was obvious as Stanley proudly showed his bookshelf of pictures and State Championship signed volleyballs and basketballs from the team’s his son Jody has coached in Paxton. Placed among the balls are photos of the Rhodes’ with the various teams and their grandchildren. Family is important to them, as are the interests of their children.

The couple married in 1950 after meeting at the roller skating rink in Geneva where Stanley worked as the floor manager to get in the rink for free. Through the years, while the Rhodes’ have worked hard, they have also volunteered extensively in the Cordova community. Both have worked with the Boy Scouts, starting the first Cub Scout Pack in Cordova when their children were young and also serving as Scoutmaster for Troop 390. Stanley served over 50 years as a member of the Troop 390 Committee, over 30 years on the Cordova Volunteer Fire Department and has been a member of the United Methodist Church in Beaver Crossing for over 60 years.

All four of their sons helped them in the auction business with Stanley running tickets from the auction ring to the clerk trailer. Stanley also kept track of everyone’s hours for Larsen and Associates. Pearle enjoyed her co-workers in the clerk trailer, noting that she and Faye Petersen spent many Saturday’s working tickets together.

The numbers game definitely suited Stanley as he obviously enjoyed the record keeping aspect of the business. He kept a notebook listing information on each of the 1,450 auctions he worked. He even went so far as to keep records on where bidders were from, noting that in their first five auctions in 2001 there were registered bidders from 108 different towns.

With all of that money changing hands, the Rhodes’ felt they were very lucky to not have many problems collection. “We only had one we had to wait a year for. As a rule we have done pretty well.
There were a few people here and there who were difficult, but as a whole not too bad,” recalled Stanley.

With all of those auctions, resisting a bargain wasn’t always possible for the pair. Stanley has a few special corn serving pieces and once collected old fruit jars. Pearle has two weaknesses, landscape sofa paintings and unusual nativity scenes. She has held on to the landscape paintings and tastefully decorated their home with them but when she had collected too many for the house she moved on to the garage, “when Stanley didn’t get the inside of the garage painted I started hanging them up in there,” she explained.

Along with that Stanley recalled, “You see all kinds of things at a sale, it got to where nothing surprised us anymore. The one item that surprised us was at an auction near Bradshaw where an old post office box made out of wood that was weathered and worn had no identifying markers on it of where it came from or it’s age went for $2500. That was a real surprise. Someone knew something about it.”

Stanley’s cousin Robert Rhodes has also worked with them in the auction business starting in 1971, “It has been a gratifying experience to work with him all these years. He’s always above the board, never had to feel like anyone was taken advantage of, everything was above the table.”

Although the Rhodes’ are retiring from clerking, Larsen and Associates will continue running quality auctions in the area. “Jackie and I will take over and go with computerized clerking system which will hopefully speed up the check in and check out process and help our sellers - it will show them the ins and outs of their sale. We [Rhodes’ and Larsen’s] started talking at the first part of this year, it was their decision [to retire]. They announced their retirement at the last auction they conducted which was in Cordova in June. I thought it was a fitting place for them to retire, here at home,” said Lance.
Posted by Leesa Bartu at 9:12 PM