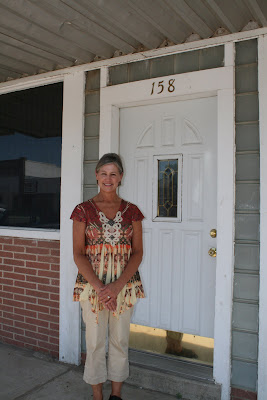 Main Street in Exeter has a new business opening downtown this week. The Diet Center of York, owned by Gerri McIntyre, has recently opened a branch office in Exeter.
Located just inside the law offices of Nancy Waldron, McIntyre plans to be in Exeter on Wednesday's by appointment.  "I hope to make it more convenient for people who live in the area," said McIntyre.
She purchased the business last December and has expanded to offices in Hebron and Stromsburg before adding the Exeter location.  She is also looking to open an office in Seward. McIntyre quipped that "Everyone is so busy we need to make this as convenient as we can."
The Diet Center has four different diet plans which can be tailored to the needs of individuals.  "We have plans that meet each lifestyle.  Some are designed for users to lose one to two pounds in a week while others are for losing three to four pounds a week," according to McIntyre.
The program was started 35 years ago and expanded to four different plans.  Some of the plans use shakes and bars with a sensible dinner while other plans use an eating plan.  To start the program uses the Tanita Scale which measures body composition and the percentage of fat to attain the amount of projected weight that each individual should lose.
McIntyre noted that the plan is available for both men and women and a free consultation is available.  McIntyre can be reached at 402-362-2780 or by email at gmdietcenter@gmail.com to schedule an appointment.
Posted by Leesa Bartu at 9:51 AM