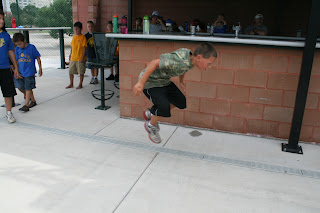 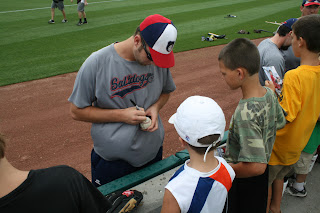 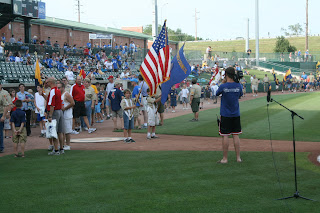 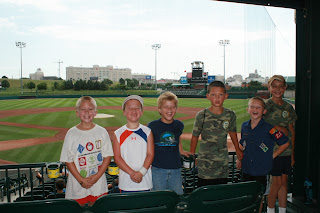 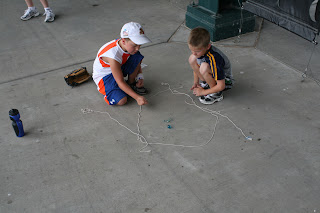 Six Exeter Cub Scouts recently participated in the Cornhusker Council Saltdogs Cub Scout Daycamp.
The boys and the parents and leaders spent the afternoon at Haymarket Park learning about baseball and participated in lots of fun activities.  Some of the planned activities were curtailed due to the heat but with plenty of water and some shade the boys were able to do some activities toward their physical achievements.
The boys spent part of the afternoon earning belt loops in map and compass, marbles, good manners and one of their favorites, video games.  After rotating through five different activity stations they boys were presented a program by the Saltdogs and then enjoyed an autograph session with the players.
After taking a short supper break, the Exeter scouts paraded around the Saltdogs field with their pack flag before watching several ceremonial first pitches, including some by scouts in the council. Scouts also served as watchdogs for the players as they were introduced.  Joey Bartu of Troop 270 carried the American flag onto the field for the performance of the Star Spangled Banner to open the game.
During the game the Exeter scouts played baseball bingo, and enjoyed themed prizes. The boys all earned multiple achievements and awards and all received a day camp patch.
Posted by Leesa Bartu at 10:30 AM