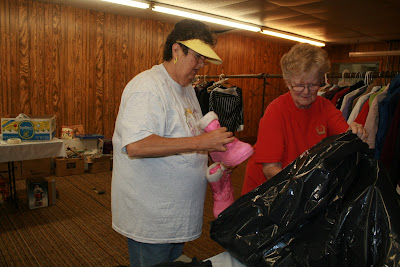 When the five weeks of the Exeter Garment, Gadget Giveaway store were done, they did what they always do, gave everything away.  Brenda Stutzman who owns Country Neighbors in Beaver Crossing came to pick up the items that she could use in her store.
For six weeks this summer the Exeter United Methodist Women's group opened the Garment, Gadget Giveaway store on Friday and Saturday mornings and gave everything away. Donations of clothes and household goods were also accepted and were graciously received.

Roma Rhodes who spearheaded the group's efforts was overwhelmed with the outpouring of generosity of the community, "The tables were piled high, over a foot deep with clothing for all sizes."
Last year, their minister, Jeff Adams, challenged the ladies group to have a mission.  They took on not one, but two projects in the community.  The group began supporting the Backpack program at the Exeter-Milligan school that sends home a weekend's worth of food with schoolchildren for families who are in need. Hoping to meet another need in the community, the group began the Garment Gadget Giveaway store for everyone in town and the surrounding communities.
"We gave everything away for free.  People could leave a [monetary] donation if they wanted to, but we felt it was a good service to the community," according to Rhodes.
The use of the storefront was generously donated to the group by Doug Anderson who owns the space and all the UMW had to do was pay the electric bill.  Many members of their group came and worked at the store from those of retirement age to elementary students.  "We have had so many who worked so hard here and volunteered their time including Janet Miller, Janice Miller, Evelyn Michl, LaVonne Guthrie, Erma Adamson, Sherry Mounce, Ashley Benordan, Torie Glenn, Clarissa and Katie Mounce," said Rhodes.
It was only fitting when they decided to close the store for the year that the group continue their mission and give away what was left.  One of the first to come and collect items was Brenda Stutzman who owns the store Country Neighbors in Beaver Crossing.  Stutzman sells new, used and unique items in her store in Beaver Crossing, with all of the profits from donated items going toward breast cancer projects in Nebraska.
"Myself and all three of my sisters have fought breast cancer and I have one sister who is fighting for her life right now so cancer projects are my priority.  We also give away winter coats and clothes to those who need them and share with the Matt Talbot and City Mission in Lincoln as well as the mission in York.  All of the items are used somewhere, nothing goes to waste. I can always find someone who can use something," explained Stutzman.
Stutzman was eyeing winter coats, boots and blankets "for our crisis pantry at church."  Janice Miller and Rhodes were sorting through the leftover clothes, setting aside some of the boys clothes to be taken to Epworth Village in York and planned to approach Blue Valley in Geneva with the household and clothing items that remained.
The members of the United Methodist Women in Exeter were thrilled with the results of their store this year and when asked if they plan to continue the service next year Rhodes answered, "God willing!"
Posted by Leesa Bartu at 11:05 AM