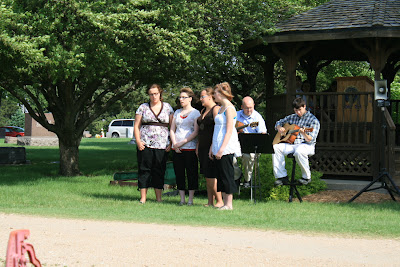 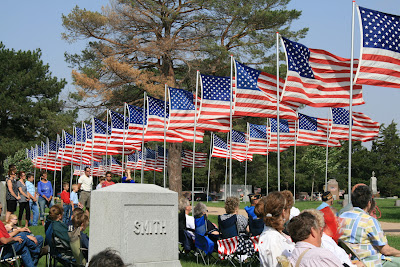 Part of the Exeter American Legion Post 218 Avenue of Flags. 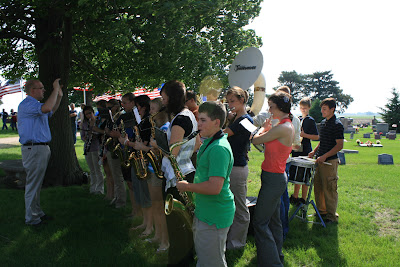 The Exeter-Milligan Band performed several numbers under the direction of instructor Shane Whitford. 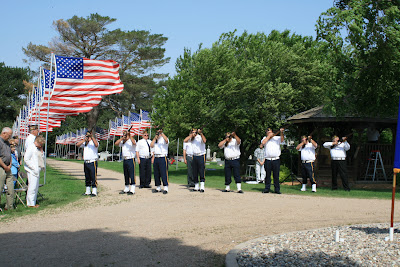 William Sullivan Post 218 members give the "salute to the dead." 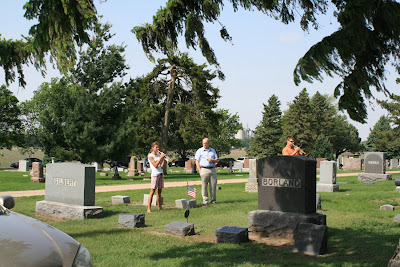 Exeter-Milligan band members Blake Papik, right, and Jennifer Pribyl, left play Taps and Taps echo under the direction of music instructor Shane Whitford.
Despite high winds the Exeter community came out as usual to show their respect and remember those who gave the ultimate sacrifice to their country.
The Exeter Cemetery was dressed with the avenue of flags standing at attention.  After the color guard placed the colors, Tim Wilbeck announced the program.  Father Tom Kuffel lead the prayer and the Exeter-Milligan band played the national anthem.
Exeter-Milligan seniors Kelsey Moore and Heather Pribyl both read pieces. The Exeter-Milligan choir performed "Oh Brother, My Brother" a piece about the fighting between brothers during the Civil War.
Wilbeck spoke about the meaning of Memorial Day, "honoring those who answered our nations call."
He also reminded those gathered that "the peace and freedom paid for with the lives of others sacrifice is meaningless without remembering."
He called upon those in the crowd to not forget.  "It is the thought that counts, it is personal acts of remembrance as well as public acts."
After Blake Papik performed Taps and Jennifer Pribyl played Taps Echo the crowd was invited to a reception at the Exeter American Legion.
At the Legion part of the choir performed "Oh Brother, My Brother" again and those attending were able to purchase poppies, see the poppy poster created by Exeter-Milligan students and also see the progress of the Legion Service Member scrapbook.
Posted by Leesa Bartu at 4:36 PM