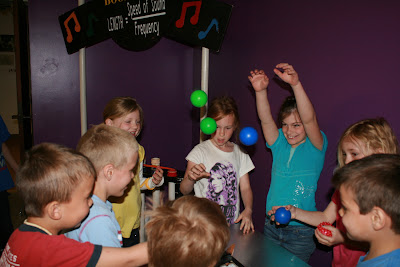 Exeter-Milligan Kindergarten, first and second graders spent Friday learning and exploring at the Edgerton Explorit Center in Aurora.
The students enjoyed learning about stopping time during a demonstration by Executive Director Ken Schroeder. They took a photo of a balloon popping and learned about the Stroboscope which was invented by Doctor Harold Edgerton who grew up in Aurora, Nebraska. The center holds many of his inventions and ideals and has a goal to teach visitors with hands-on exhibits and demonstrations.
Throughout the visit the students also enjoyed playing with a life-size operation game, took pictures of themselves popping balloons and also enjoyed playing with the giant bubble wand and giant bubbles the learned about during a demonstration on making bubbles which involved them each being encased in a bubble.
After enjoying lunch at a local park the group had fun learning about some really cold science.  They learned about dry ice and watched multiple demonstrations on the properties of water by Mike Randall, the science educator at the center.
The ended the day of fun and learning with a shocking experiment.  The final demonstration of the day was by John Thompson, director of operations. The Van de Graff generator was the spark of this show, teaching the kids about electricity.  The students took turns making a circle to feel a shock run from one student to another through their hands.
The Edgerton Explorit Center hosts schools and groups as well as individuals and according to Randall, "what we do here is getting kids inspired about science."  Part of that mission involves summer camps and Mad Science Mondays.
Posted by Leesa Bartu at 12:36 PM