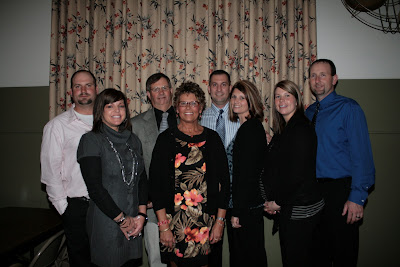 Alan Songster and his family were recognized for their contribution to the agriculture community at the Exeter Feeders and Breeders banquet.  Pictured from left to right are  Kevin and Leslie Songster, Alan and Noreen Songster, Craig and Katie Songster and Cara and Jeremy Stoll.
For the 69th year in a row the Exeter Feeders and Breeders held their annual banquet.  This year the event was held on Saturday evening at the Milligan Auditorium.
After a welcome by toastmaster Cal Sigfried and an invocation by Father Bourek guests were served a prime rib meal and door prize drawings were distributed.
President of the Exeter Feeders and Breeders, Brad Parr of Sutton, presented scholarship awards to area students.  Cassie Harre of Exeter, was awarded the Andy Bruntz Memorial Scholarship, Jessica Hansen of Dorchester was awarded the Farmers Cooperative Scholarship, Caroline Harre of Exeter was awarded the Geneva Milling/Advanced BioEnergy scholarship and Tyler Manning of Burress received the Farmers and Merchants Bank Scholarship.  None of the recipients were able to be present as Exeter-Milligan seniors were attending their senior trip and Dorchester was holding their prom that evening, however, all of them sent thank you notes.
Each year the Feeders and Breeders honors an individual who has made a significant contribution to the agriculture community.  This year Alan Songster of rural Exeter was honored.  Songster has been involved in agriculture and working cattle since his childhood and is now working with the next generation of his family in their farming operation.
During his acceptance speech Songster recognized the support of his wife Noreen, who shared the stage with him, along with that of his three children and their spouses and families.
The Exeter Feeders and Breeders support a number of agricultural events in the area including events at both county and state fairs.  In 2012 the Nebraska Cattlemen's Ball will be held in the McCool area which will be a special event for the Exeter group to support.
After the benediction, singing God Bless America, the crowd enjoyed entertainment by Hay Seed Cowboys.
Posted by Leesa Bartu at 8:44 AM