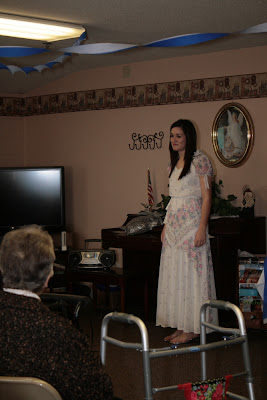 Caroline Harre modeling a dress worn by Kristi Horne in 1980. 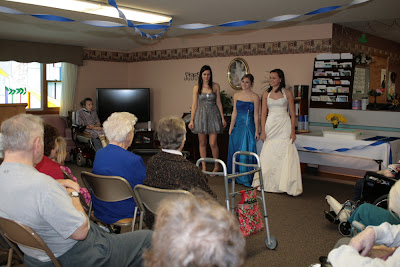 From the left Caroline Harre, Cassie Harre and Meredith Emshoff model some of the current trends in Prom fashion at the Exeter Care Center. 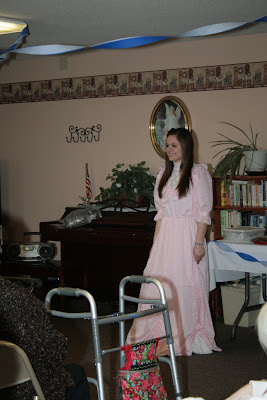 Brooke Manning models a dress made by her Aunt Jennifer Manning in the early 1980's.
Wonder what your mother and grandmother wore to Prom? The Exeter G.F.W.C. hosted a Prom Fashion Show at the Exeter Care Center last Thursday.

While the high school models brought some of their own dresses to the show, they first modeled the fashions of their mothers and grandmothers.

Woman’s Club member Judy Dinneen found the dress her mother made her for a formal in the late 1950’s and Cassie Harre modeled it. Judy recalled "I told my mother just two weeks before that formal that I had decided to go and I needed a dress. She made it for me."

Some of the girls modeled dresses their mother's and aunt's had worn. Many of the dresses had been made by hand, but the newer dresses were all from specialty dress shops.

Over the years the styles have changed moving from the fluff of the fifties and sixties, through the simple cotton fabrics and lace from the seventies and eighties, the satin of the late eighties and nineties to today's sleek form fitting cocktail dresses.

Sewn into those dresses were many memories of romance, dreams and most of all fun. Karen Chapman, President of the Exeter G.F.W.C. Woman's Club described each dress as the models approached. Her granddaughter was a model and several of her own daughter's dresses were shown.

After the dresses were shown and the photos were taken, the Woman’s Club members shared dessert with the care center residents and the models.