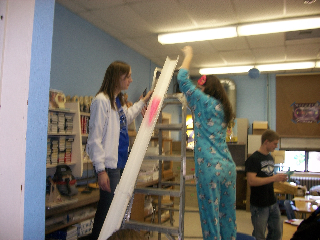 Amanda Dineen and Heather Pribyl test their car while Tyler Manning prepares his. 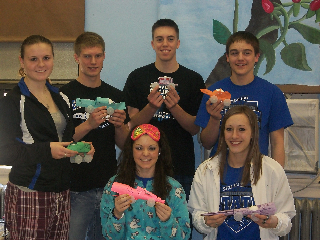 Students in Ms. Sliefert's Physics class had to design and build a car for both speed and crashworthiness using the supplied wheels and only 3 sheets of paper. Cars could not have a mass more than 30 grams. and could not have a width larger than 6.5 cm. On race day students determined whose car was the fastest.
Heather's car left everyone in the dust. On Crash Day, students had to put an egg in their car. The cars had to be designed in such a way that when it hit a hall the egg still survived. Amanda's egg was the sole survivor. Everyone seemed to enjoy the Challenge.
Posted by Leesa Bartu at 11:00 AM