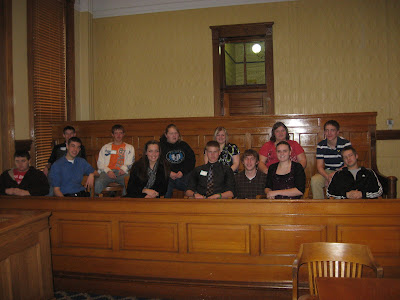 The Exeter-Milligan American Government class attended
Fillmore County Government Day on February 24, 2011 in
Geneva.  Students had the opportunity to learn about the
various functions of the County offices.  The students
participated in the Annual County Government Jeopardy
contest.  Fifty questions about state and county government
were asked to random participants from all schools using the
Jeopardy format.  The final jeopardy question was "The year
the Courthouse was built."  All three schools answered the
final question correctly and Exeter-Milligan won the contest
by scoring 1050 points, Fillmore Central finished second
with 1040 points, and Shickley finished with 400 points.

County government day was a excellent learning opportunity
for the students.  Fillmore County does a great job hosting
this event.  We would like to thank all of the County
Government officials and the American Legion for all the
work they put in to this event.