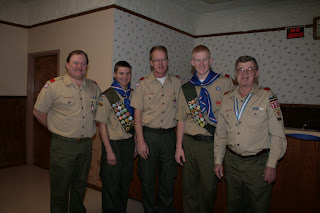 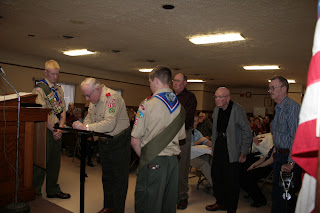 Two young men, Landon Rhodes and Cody Soukup, were honored on Sunday afternoon by the Scouting community surrounding Cordova. They were presented their Eagle Scout Rank at a Court of Honor at the Cordova Community Center.
Assistant Scoutmaster Lance Larsen served as the master of ceremonies of the event.  After the First Class Scouts in the troop led the opening ceremonies with a flag salute and information about the flag the Troop Committee Chair, Robert Rhodes led the group in an invocation.
Larsen shared several interesting facts about the scouting program and the small percentage of young men who join scouting and the even smaller percentage that reach the rank of Eagle Scout. He commended Landon and Cody on the many hours of work spent achieving this goal along with the commitment of their parents and leaders.
The guest speaker for the evening was invited by the scouts, Eagle Scout Shane Whitford is the music instructor at Exeter-Milligan School. Whitford shared some of his scouting background and challenges to the new Eagle Scouts.
The Scouts were given their Eagle honors by Scoutmaster Warren Thomsen and the patches were pinned on by their mothers. The boys also gave their mothers and fathers eagle parent pins.  Their Eagle awards were both very special as they earned them in 2010, the 100th anniversary of the Boy Scouts of America.They carry a special notation on the award that will not be used again.
Both Eagle Scouts entered their signatures in the Troop 359 Book of Honor and Troop Committee Members Don Due, Laurence Jensen, Robert Rhodes and Stanley Rhodes also certified the entry with their signatures.
The new Eagle Scouts shared about their journey and their projects, earning 21 merit badges, attending scout camp and planning and conducting an Eagle Scout Project. They also took the opportunity to thank the Cordova American Legion for supporting Troop 359 for the last 62 years.
After singing "God Bless America" together, the colors were retired and the guests were treated to a meal. Those attending were invited to look at the display of letters the Scouts received from the President, military officials, senators and other dignitaries.  The fathers of the Eagle Scouts presented them with flags flown over the White House in their honor.
Posted by Leesa Bartu at 12:43 PM