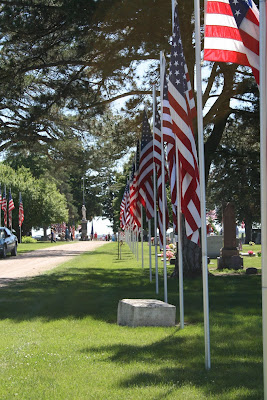 Avenue of Flags at the Exeter Cemetery 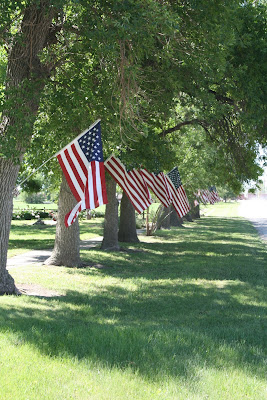 Flags on the cemetery road put up by Dennis and Doreen Johnson.

It was about honor, respect, gratitude and of course, the symbolism of the flag. The site of those two proud rows of flags flying on a sunny morning will bring any patriotic American to tears when they understand the meaning of the flags.

The Exeter Avenue of Flags started in the 1980’s with twelve flags, flag poles and spots to hold them and has grown to 100 plus flags flying at the Exeter Cemetery every Memorial Day.

The Exeter American Legion Auxiliary members saw the idea in the early 1980’s in a Legion newspaper, recalls Erma Adamson. Adamson, Tess Moor and Margaret Moravec were the members of a committee formed to pursue bringing the idea to Exeter.

The Auxiliary members dove into the project, purchasing 12 flags and flag poles. They enlisted the assistance of the Legion to provide the manpower to dig the holes and help with the flag pole assembly. The flags were placed near the war memorial at the Exeter Cemetery.

The 12 flags represented the 12 Exeter Legion members who had lost their lives in service to their country, the gold star boys. From there it grew and continues to grow. Individuals with ties to Exeter donate a flag and purchase a flag pole to be added to the avenue in memory of their loved one, according to Adamson. The names of the veteran are written on the flag in an appropriate spot.

Often after the Memorial Day services at the cemetery family members will wander up and down the Avenue of Flags searching for their veteran’s flag and taking a moment to remember him and his service.

Currently over 100 flags fly in the Avenue of Flags at the Exeter Cemetery. Members of the Legion, Auxiliary and community volunteers put the flags up every Memorial Day and the twelve original flags are also placed in the avenue for funeral services of Exeter Legion members, weather permitting.

The flags used to be placed at the cemetery every patriotic holiday but now with so many flags to be placed they are only all placed on Memorial Day. Flag Day, Fourth of July, Memorial Day and Veterans Day bring flags to the downtown area sponsored by the Legion and put up by a variety of volunteers, including Legion members and Cub Scouts.

The United States flag was adopted by the Second Continental Congress on June 14, 1777 and in 1916 President Woodrow Wilson established June 14th as Flag Day by an official proclamation. Flag Day was nationally recognized in August 1949 by an Act of Congress.